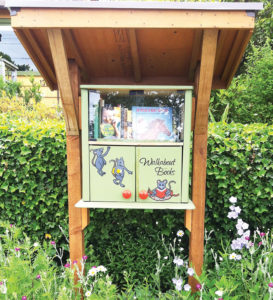 It has been my habit, over the last two years, to tuck a few gently used books into my bag as I head off to my yoga class. These books are my regular contribution to Walkabout Books, the little street library that is located next to the steps leading up to the yoga studio. Walkabout Books was built in memory of Kathryn Maurer, a friend, yogi, neighbour and teacher of reluctant readers.

Built in September 2013 from an old TV cabinet from Freecycle, this library is a very busy and appreciated addition to the neighbourhood. Cyclists, pedestrians, motorcyclists, skateboarders, moms and dads with kids in strollers, folks of all ages stop to borrow or leave books.

Brenda: How has the library been received by the neighbourhood? Is it well used?

Kelly: We probably see 20 to 35 folks a week peek in or leave books. I often see folks do a double-take driving by and turn around and check it out. Sometimes, if I am outside in the garden, they call out to me asking for a “good read suggestion” or voicing appreciation. Sweet!

Brenda: Is damp/winter weather an issue for the books?

Kelly: No. We wipe down any excess moisture and books don’t stay long in any case.

Brenda: Where do the books in the library come from? 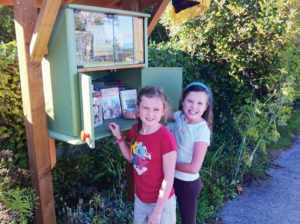 Kelly: Everywhere! Yogis bring them as do frequent users and folks from Literacy Nanaimo and friends and anonymous donors. Sometimes it’s chockablock full and others times maybe only 30 or so books, but the turnover is rapid. Several times bags and boxes of books have arrived at once. So, I store them briefly and leave them in the library as space permits.

Brenda: Are there any negative aspects to maintaining the library?

Kelly: Not at all. It has been respected and enjoyed by a wide circle of people. I think that when we extend ownership to our community, the community takes responsibility for caring. There has not been one problem with harming. 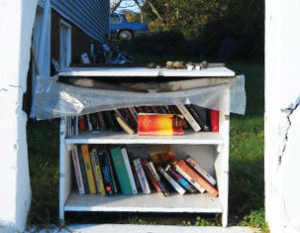 Brenda: Where did the inspiration/ idea for your library come from?

Barbara: I was visiting with a friend who lived in a high rise in Vancouver. There was a bookshelf in the mailroom of the building where people left magazines and books to share with the other tenants. I thought that was a really great idea and wondered if it would work at home.

Brenda: How long has your library been in its present location?

Barbara: The first version was simply a wooden shelf that I placed at the edge of the road in front of my house eight years ago. At first people were not sure what it was all about, so I left a note inviting them to borrow and return books. Within a short time folks responded. The wooden shelf eventually weathered and was replaced by a plywood structure with a roof and glass doors. This summer the library was rebuilt with volunteer labour and donated materials. It has a shake roof, glass doors and wood siding instead of plywood. We reopened the library with a community gathering and a celebration. 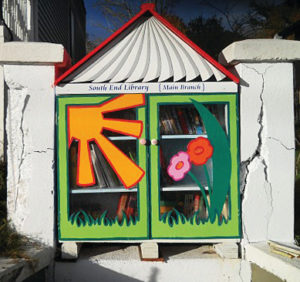 Later version of the library [photo by Barbara Densmore]

Brenda: What effect has the library had on your neighbourhood?

Barbara: The library is well used. People donate and exchange books on a continual basis. There is a strong sense of community ownership and pride and there have been no incidents of interference or vandalism in the eight-year history of the project.

Brenda Boreham
Brenda has 35 years of classroom experience. She has presented workshops on literature-based themes and literacy strategies and has written a number of resources for teachers. She remains passionate about matching up kids with books.

Teaching After Teaching – A Lifetime of Caring

Powerhouse Foods to Keep You Healthy