From the Deserts of Africa to the Sub-Arctic: A Refugee’s Story

Kakuma UN Refugee camp, a sprawling basket of humanity at the northernmost corner of Kenya, is home to over 100,000 displaced people fleeing conflicts from all over Africa. Kakuma, loosely translated from the Swahili word for nowhere, is aptly named for this sand-blasted region which receives little or no rain. It was here that Jackline Nambafu and her mother arrived in 1996 after fleeing a civil war in Uganda. 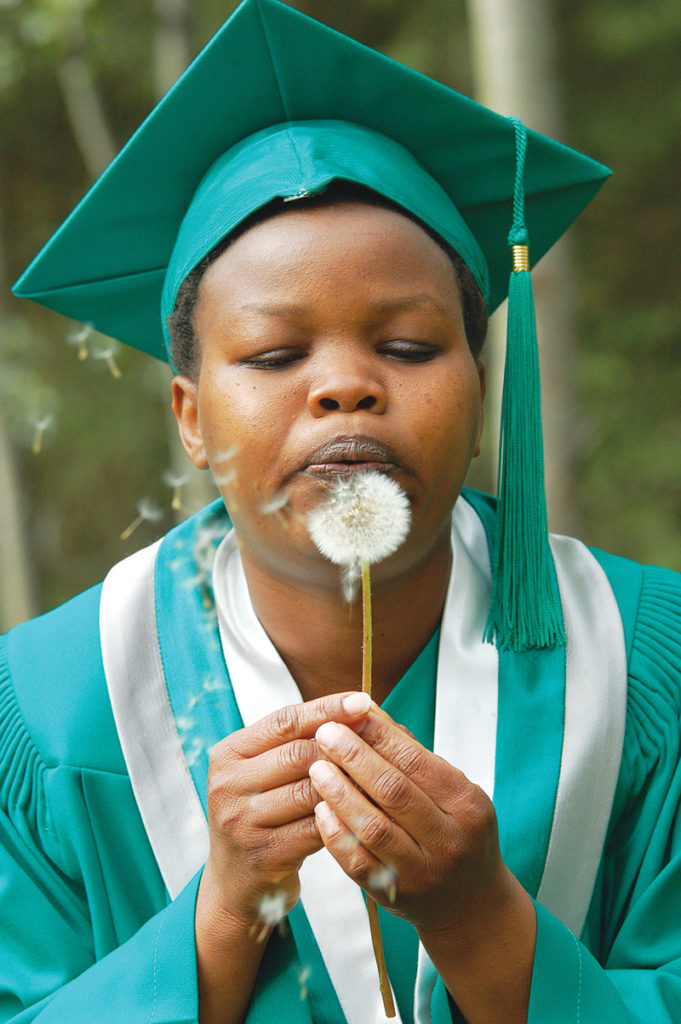 “I was 10 years old when we arrived,” says Jackline. “I lived in Kakuma for twelve years before finding sponsorship with a church mission which brought me to Houston in British Columbia.”

“I was one of the lucky ones,” she explains. “In the camp we lived in a simple, one-room mud hut, thatched with grass with a bare earth floor. We hardly had anything, just a few pots and pans and plastic containers to collect water from the community well. I slept on a dried mud platform with no mattress and often went to school hungry. The UN provided food which was supposed to last a month, but it wasn’t what I was used to and at first it made me sick. There was never enough food to go around and local Kenyans from nearby settlements frequently raided the camp to steal food from us.”

But the lack of food was not the only problem. With few established social structures, human rights conditions were fragile, especially for women. Being entirely dependent on humanitarian aid and with no possibility of work or self-determination, this life of exile consisted of constant waiting and dreams of new hope.

In 2008, on a bitterly cold January evening, Jackline, accompanied by her two-year-old son and pregnant with her second, landed at Smithers airport, her dreams of a new beginning at last becoming a reality.

“It was so cold,” said Jackline. “I wore two jackets but was still freezing. I’d never seen snow before and it felt really weird under my feet.”

Within days of settling into her new home, Jackline enrolled at the Houston campus of Northwest Community College. Sandi Lavallie, CCP instructor, remembers first meeting Jackline. “There was something warm and accepting about Jackline. Her willingness to learn and determination to make a success of her new life has been a joy to watch. We should not underestimate the huge social adjustments and cultural differences that face refugees in Canada, which makes Jackline’s achievement so much more remarkable. We are all very proud of her.”

On June 9, 2014, Jackline completed her grade twelve and graduated from NWCC, Houston Secondary School and Houston Link to Learning. We all wish her the very best of luck for the future.

Mark West
Mark has worked professionally as a freelance photographer and journalist for various UK based publications including the Independent and Guardian newspapers. He has traveled extensively and contributed articles from the former Yugoslavia and Kurdistan before seeking a career in education. In 2009 Mark immigrated to Canada where he now works as an Educational Advisor for Northwest Community College, British Columbia.

This article is from Canadian Teacher Magazine’s Sept/Oct 2015 issue.