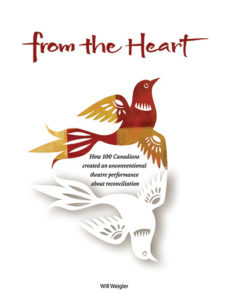 From the Heart was written by Will Weigler, a community-based theatre director, teacher, playwright and producer. The book tells the story of how a theatre piece called “From the Heart” was developed and then performed in the summer of 2013. “From the Heart” was co-created by a core group of 30 people who were joined by 70 others to perform it once the script was written. Staged in an indoor labyrinth (built from salvaged doors, windows and hundreds of metres of fabric) the play invites the audience to consider ways to reshape Canada’s relationship with First Nations, Metis and Inuit people. Six times each night an audience of eight people at a time made their way slowly through the labyrinth. All 120 shows were sold out and the play went on to win the Best New Play of the season from Victoria Critic’s Choice Spotlight Awards.

Classroom Connections: For educators who are interested in developing ways to address the issue of reconciliation, this book suggests the use of theatre to promote that dialogue. It is designed to support schools and community groups to create their own version of the performance and includes a detailed section called “The nuts and bolts of producing From the Heart in your community.”

This review is from Canadian Teacher Magazine’s Sept/Oct 2015 issue.

In Graphic Detail: Using Graphic Novels in the...