A Full and Rewarding Life, After Teaching

After a varied career of teaching and working for the Minister of Education in Saskatchewan, Vernice Shostal took her boundless energy and myriad talents to Victoria where she now devotes her time to the many activities of the international organization Zonta. She has written and published books and articles in various magazines but she still finds time to enjoy the outdoors and participate in French conversation sessions. Vernice’s retirement shows how much a person can learn from and contribute to the lives of others, and enrich their own after leaving their primary careers. 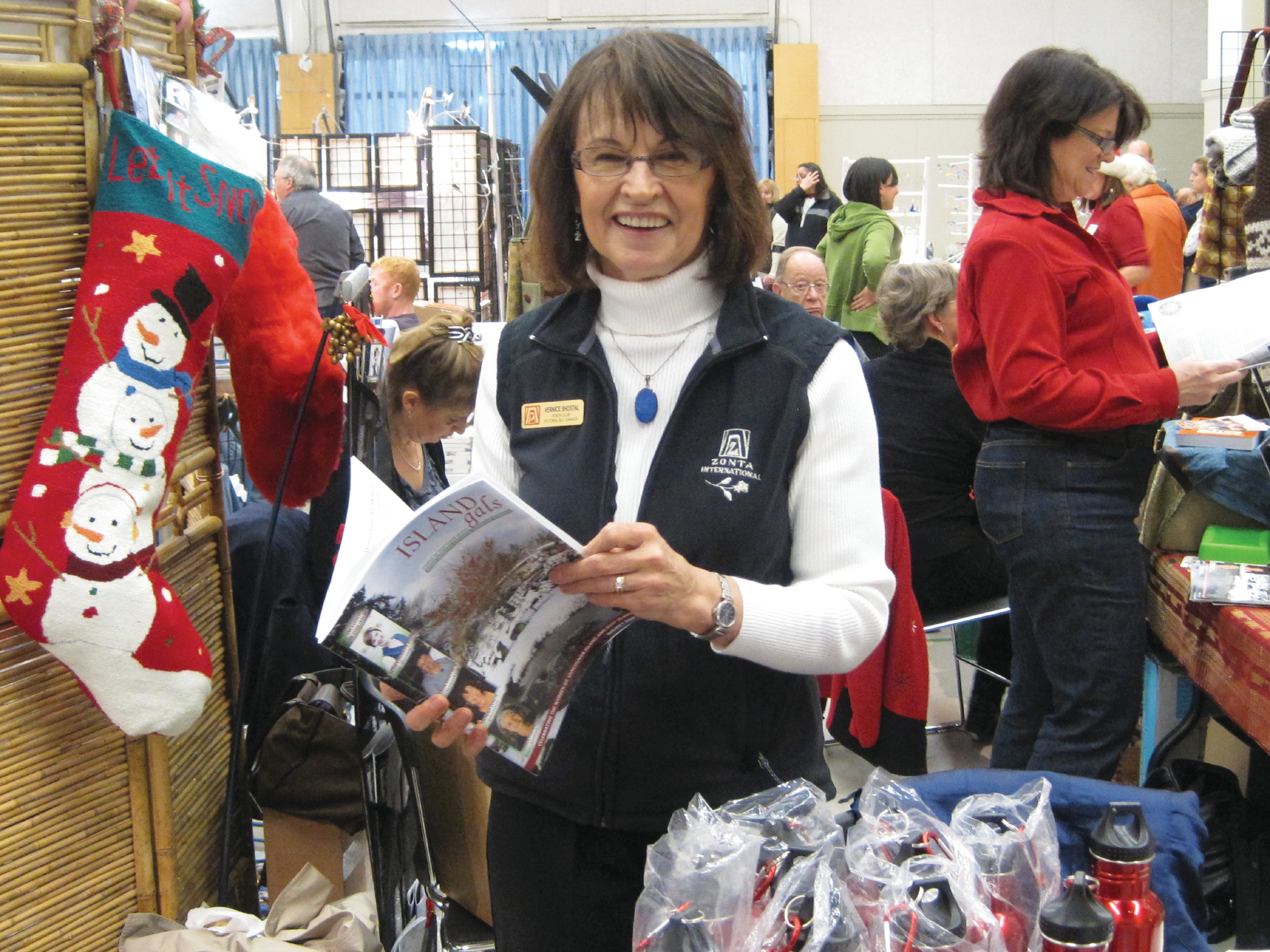 What was your original area of work in education?

I started teaching high school French and English in rural Saskatchewan. While there, I organized student exchanges with schools in Quebec. My class of Grade 12 students partnered with a similar class of students at a school in Quebec. We visited them during our spring break, attended their school and were billeted in their homes. In return, the Quebec students visited our school for a week and were billeted with our families. We all participated in local activities organized to better understand each other’s provinces.

Did you work outside of the educational system in Canada?

I taught for 26 years, after which I spent four more years working for a local MLA and Minister of Education. After that I retired to Victoria where my children were living. During my teaching career, I also I worked as an evening sessional lecturer for one year, teaching teachers of English while the regular professor was on leave.

What type of volunteer work are you now involved in?

I belong to the Zonta Club of Victoria (zontavictoria.org). Zonta is a Sioux Lacota word that means honest and trustworthy. It is an international service organization that works to empower women through service and advocacy, locally and globally. The organization was established in 1919 in Buffalo, New York, by a group of women who were the first to receive a college degree, the first to have a vote and the first to actually be able to work in the corporate sector. The idea spread to Toronto, which made it an international organization.

The organization now works through the United Nations with over 12,000 clubs in 67 countries. Our motto is “Empowering Women through service and advocacy.” We believe that it is important to educate both men and women to stop violence against women and that education for women is an absolute necessity.

Our district organization (zontadistrict8.org) which includes clubs from Alaska to Oregon, supports a scholarship for a female student at Pearson United World College. The organization also caters to students at Pearson by sending goodies during special holidays. Also, because some of the students come from hot countries and often feel cold when they come to Pearson, Zonta Victoria gifts each student with an afghan—mostly knitted by women in retirement complexes.

We also fundraise to help women in need locally: The Sexual Assault Centre, Wear 2 Start, Bridges for Women, Victoria Women’s Transition House, PEERS. We have done “hands on projects” such as Soup Sisters and organizing Ditty Bags every Christmas to send to various women’s shelters, as well as supporting Rock Solid, an elementary school anti-bullying program.

Zonta offers three scholarships for female students. 1) YWPA (Young Women in Public Affairs) is open to high school students. The criteria is based on ability as well as volunteerism. 2) Jane M. Klausman – Women in Business scholarship is open to women pursuing a business or business-related degree. 3) Amelia Earhart Fellowship—worth $US10,000 at the international level—is open to women pursuing a PhD in aerospace-related sciences or aerospace engineering. The Zonta Club of Victoria also supports several scholarships locally.

What were your reasons for deciding to continue to work/volunteer after retirement?

Teachers live very busy lives and acquire many skills during their careers. In the rural school where I taught, I was often given a subject to teach that I had not been trained in —social studies, keyboarding, art, music, guidance and science. Consequently, I quickly trained myself. I very much enjoyed this challenge because I loved learning as much as I loved teaching. I also coached drama for 26 years. Other extra-curricular activities I was involved in were coaching volleyball, staff rep for the Student Representative Council, grad co-ordinator, yearbook coach and newspaper coach. It’s a shame to let all these skills go to waste when one retires! To suddenly do nothing after retirement would be sudden death.

What made you decide on writing?

When I realized that I had the time to write full time, that was exactly what I wanted to do. I had done a lot of writing during my teaching career (I was once editor of a teachers’ sorority newsletter). And once a teacher, it’s hard to get out of the school mode. I have self-published a book—Night Drive—that has been approved by ERAC (and given some pretty good pluses) for use in the high school system. The book deals with a young man’s battle with poverty, alcohol and drugs, discrimination, hormones and peer pressure. It was meant to help students make better choices in their own lives. The book can be purchased through my website (verniceshostal.com). I also write for magazines and plan to publish another book about youth in the future.

What challenges did you encounter in your new endeavours that you did not expect and how did you deal with them?

The problem was getting published. When I became one of the writers for Senior Living magazine, I think I just happened to be at the right place at the right time. Trying to get my first novel published was more difficult. Although I got some good feedback from a few publishers, the book didn’t seem to fit their criteria, so I decided to self-publish. I’m glad I did. The fact that ERAC approved Night Drive for use in high schools, I think, says that it is a good young adult novel.

As for joining the Zonta Club, after a year in the club, I was asked to run for vice president—a two-year position, which led to the position of president. Had I known how much learning was involved in such an organization, I might have waited a little longer to take on the job. Since Zonta is an international organization and works through the UN in many countries, there is a lot to learn. However, because there are directions and education from Zonta International, I was able to have all my questions answered by searching the website and attending conferences and workshops.

What have been the rewards of your new endeavours?

By joining the Zonta Club, I have met many wonderful people and made a lot of new friends both locally and internationally. The association with people from other clubs all over the world is one of the many advantages that we enjoy when we belong to an international group like Zonta. From time to time our club communicates with our sister club, Kyoto 2, in Japan, and every two years, we have an opportunity to meet members from Kyoto 2 at an international conference held somewhere in the world. The 2014 conference was held in Orlando. The 2016 conference will be held in Nice, France.

As for my novel, the feedback I have received from readers makes me feel good. I hope it will make students feel good as well.

What impact has your choice had on your life in general?

Being part of Zonta makes me feel that I am making a small difference to make lives better somewhere. In the meantime, I have met some people during workshops and seminars and conferences that have a similar mentality and we have become very good friends. So friendship was an important aspect.

As for my writing career—I do consider this my second career—like many people, I always wanted to write. It gives me something to do. I’m my own boss and I don’t get bored. Writing for magazines gives me a chance to meet new people and when I’m writing a novel, I do a lot of research. Consequently, I continue to learn.

Were you ever worried that you might have made a mistake in your choices? Did you have a Plan B—what was it?

I was never worried that I might have made a mistake because, if I wanted to, I could quit at any time. I didn’t have a plan B, but if I had nothing else to do, I would have become an avid golfer—or tried to.

Did your new activities require any special training?

Nothing I did after retirement required special training, although being a part of Zonta is a great learning experience. It takes a few years to learn it all because the organization does so many things in so many parts of the world.

As for my writing, I have invested in a few books that helped me understand more about magazine writing. I have also taken writing classes.

How has your background in education aided you in what you are now doing?

As an English teacher, I had the skill to recognize what was good writing and what was not.

How long do you intend to be doing the type of work you are now doing?

I intend to stay in Zonta as long as I can be an active participant. As for my writing, I will continue until, and if, I get tired of it. I don’t know when that will be. If the day ever comes, perhaps I can spend more time reading or doing some outdoor activity.

What advice would you give to others interested in pursuing the same type of activities with which you are involved?

For anyone who would like to join Zonta, there are plenty of opportunities to get involved in the scholarship program, service, finance and organization. There are also opportunities to socialize.

Further comments on your retirement choices.

For me, as a writer, it is important to be able to give to the community. Writing for Senior Living, I want to make people feel good about themselves. With my novels, I hope readers will be entertained as well as come away having learned something new.

I am happy with my retirement choices. Victoria has many walking trails—I live near a lake and love to go for walks in the most beautiful natural surroundings. There are lots of things to do here and I participate in a weekly French conversational group to keep up my own French. I am delighted that I can live an active social and physical lifestyle while I continue to learn.

Carol Baird-Krul & Enise Olding
Carol and Enise (info@drassociates.ca) are the creators of a series of pre-retirement and post-retirement planning workshops: Transition to Retirement: The Uncharted Course©, Recently Retired: Charting a New Course© and Ideas… Enhanced and Advanced©, and authors of Transition to Retirement: The Uncharted Course. Previous articles on retirement may be viewed in back issues at CanadianTeacherMagazine.com.

Passport to the Internet

A School of Readers: Building a Reading Culture