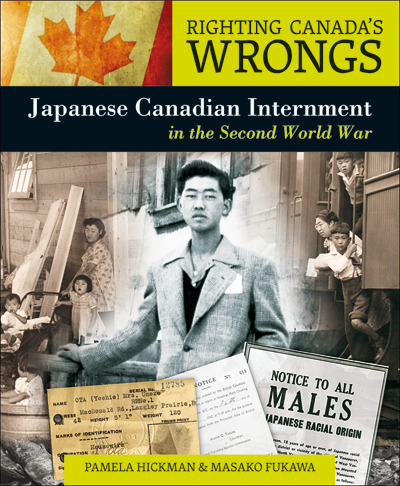 Part of the Lorimer series that focuses on injustice in Canada, this illustrated history has a title that does not do it justice. The work actually covers events from the 1800s to the present, with only about one-third dealing with war and internment. Hickman and Fukawa trace the origins of the Japanese Canadian community to 1877 with the arrival of Manzo Nagano at Westminister BC. By the early part of the twentieth-century, there were some 20,00 Japanese Canadians (both Issei first-generation and Nisei second-generation) living in the province. Originally centred in fishing villages, members of the community also engaged in logging, shop-keeping and farming. The book probes the unique culture of the Nisei and third-generation Sansei who straddled two worlds (for example, dutifully attending Japanese language schools but also excelling at baseball and rugby). Subjected to discrimination—including both government-approved exclusionary policies and everyday overt racism— things got worse for Japanese Canadians in 1942. Uprooted from their homes, their property and businesses were disposed of at firesale prices. Single men found themselves performing forced labour on roads in Alberta, while thousands of families eked out an existence in internment camps in old mining ghost towns like Greenwood or Kaslo. What followed was a diaspora: some who defied edicts ended up in Northern Ontario POW camps; others joined the British Army in Asia as intelligence personnel; at least 13,000 “went East” to live in Ontario; and nearly 4,000 were “repatriated” to a post-war Japan that many had never seen before. Only one incredibly persistent World War One veteran, Zennosuke Inouye, actually managed to get his property returned in 1949. That same year, Japanese Canadians were once again allowed to live along the BC coast but it was not until 1988 that the federal government finally issued an apology for its actions.

Classroom Connections: Designed for Canadian history and civics curricula, this work is also supported by a separate teachers’ resource guide. For high school instructors— especially those seeking primary source documents to have students analyze—this is a treasure-trove. There are usually two illustrations per page (including cartoons, photographs, paintings, government declarations and newspaper clippings from the time).

Storm the Fortress: The Siege of Quebec

Lobster Fishing on the Sea

The Halifax Explosion: Heroes and Survivors