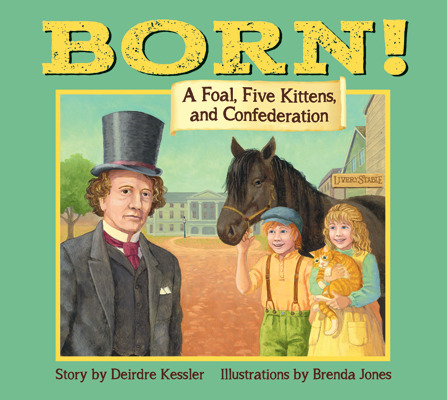 Set in the late summer of 1864, this story follows the lives of nine-year-old twins Gabriel and Grace over a period of several days. The children busy themselves with chores in their family’s livery stable and wait expectantly for the birth of a new foal and a litter of kittens. They are also caught up in the excitement of several events that are taking place in their city of Charlottetown: a circus is setting up in a nearby vacant lot, an important cricket match is scheduled between The Charlottetown Cricket Club and a team from Pictou, and politicians are arriving from the Maritimes and the provinces of Upper and Lower Canada for the meeting that ultimately leads to the confederation of Canada.

Classroom Connections: Although Grace and Gabriel are fictional characters, their friend, Robert Harris, was a real person who grew up to be one of Canada’s most famous portrait painters. His iconic painting “Meeting of the Fathers of Confederation, 1864” is reproduced in this book. Inspired by a letter written by Harris’s mother on September 13, 1864, this colourful picture book is a work of historical fiction that would support a study of Canadian confederation and geography in the elementary classroom.

For Teaching, After Teaching: The Makings of a Healthy Life

Everyone Wins! Cooperative Games & Activities for All...