Samantha Aylward is proof that enthusiasm about democracy can be infectious. The 28-year-old Prince Edward Island native is among the cohort with the lowest rates of political participation. Yet, she’s used her role as a Grade 6 Social Studies and Language Arts teacher at Dr. K. A. Clark School in Fort McMurray, Alberta to show her students that their opinions matter. 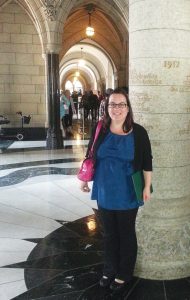 As an educator, I have the responsibility to ensure students understand the value and importance of their opinion on every level. In April of 2012, ahead of the Alberta provincial election, I hosted a variety of political representatives in my classroom to talk about their positions and the importance of public involvement.

Candidates from the Progressive Conservative Party and the Wildrose Party as well as a representative from the Alberta Party talked to my students about their parties’ platforms, why they wanted to be elected, and why it is important to vote. Students were able to ask the candidates questions and were encouraged to go home and share the information they learned with their parents. In the week leading to Student Vote Day, students watched the leaders’ debate and followed all parties on Twitter as part of a class activity that involved reading information from every party, not just the parties with candidates in Fort McMurray.

To further grow an understanding of why participating in democracy counts, I also invited municipal councillors and a school board trustee into my classroom to discuss democracy on the municipal level. The councillors fielded so many questions that one was inspired to write a blog post reflecting on his experience and the tough questions my students asked, commenting that voters in the provincial election should be asking the same of their candidates.

Student Vote Day rounded out the week, and the students ran polling stations within the school. Roles were taken that paralleled the roles played in a provincial election, ballots were cast and counted, and following the provincial election day, students received the results.

We revisited democracy in action again after a municipal by-election was called and a school trustee resigned from her position. Students knew that school board trustees were elected, but still did not really understand what the position was. So we attended a school board meeting to help them understand what the trustees were being elected to do. We also followed the municipal by-election candidates and their campaigns by discussing them daily, with students then discussing the candidates and campaigns with their parents when they went home.

Following both of these weeks, parents were calling to see what we were talking about in class, because their children had been bothering them to make a decision and go and vote. I encouraged students to take their parents to the polls (Fort McMurray has low voter turnout) and many of my students confirmed they had done so on election night.

By taking the time to email, tweet, and phone candidates, hold a Student Vote Day and host municipal representatives, I conveyed to my students the importance of being part of democracy and the impact that participation can have. As we followed the polls throughout the Alberta provincial election campaign, the students knew who was projected to win. They knew when the election was called that the polls were wrong because people had chosen to participate.

Voter turnout in Fort McMurray went up that year. My students believed that their participation in democracy had an impact on that. They believed that their learning in school and communication with their parents helped them, and others, to get out to vote. I believe it as well.

Samantha Aylward
This is an edited version of Samantha’s article that won the 2012 Canada’s Democracy Week National Democracy Challenge in the Best Blog Post category. For the 2013 edition of the Challenge, youth aged 14 to 30 can submit an entry in one of the following categories: writing, image or video. The contest runs from September 16 to November 16, 2013.