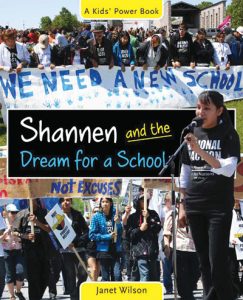 Shannen was born in the Cree community of Attawapiskat, in Northern Ontario. In 1976 a new elementary school was built. Three years after it opened, 25,000 gallons of diesel fuel leaked into the ground underneath the building. Consultants were hired but nothing was done to correct the situation and the fuel continued to leak. Teachers and students became ill and in 2000 the school was finally closed and portables were moved onto the school grounds. As the book begins, almost three decades had passed since the original contamination.

Thirteen-year-old Shannen and her classmates decided to protest the conditions in their cold and dilapidated portables by making a YouTube video. To their surprise, many communities across Canada stepped up to support them. Encouraged, the students made a trip to Ottawa where Shannen had the opportunity to speak to the Minister for Aboriginal Affairs. Despite a lack of response from the government, Shannen continued her campaign for a “safe and comfy school.” In 2010 Shannen was nominated for the International Children’s Peace Prize. Sadly, that summer Shannen was killed in a car accident.

Classroom Connections: Shannen and the Dream for a School is creative nonfiction: “The events in this story really happened and the characters are real, however…I have imagined most of the dialogue, inspired by the recollections of many of the people involved.” The many non-fiction text features (photographs, captions, quotes, excerpts from newspaper articles, maps, diagrams, fact boxes, a timeline, glossary) plus a lively writing style make this an accessible book for a variety of young readers. The social justice content lends itself to developing questioning and inferring skills.

Lobster Fishing on the Sea