Secrets of Lake Simcoe: Fascinating Stories from Ontario’s Past 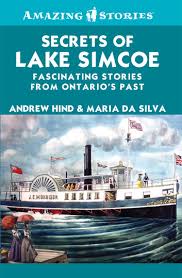 Secrets of Lake Simcoe: Fascinating Stories from Ontario’s Past

Secrets of Lake Simcoe: Fascinating Stories from Ontario’s Past is part of the nonfiction “Amazing Stories” series aimed at Canadian readers aged 11 to 14. The publisher’s stated goal is to “grab the attention of young readers with books that connect to the things they care about.” Authors Andrew Hind and Maria da Silva have chosen fourteen short tales involving soldiers and settlers, colonies and canals, sailboats and sidewheeler ships, a convent and confidence artists, along with a collection of murder mysteries. Situated in southern Ontario, about an hour’s drive north of Toronto, Lake Simcoe has often been described as the sixth Great Lake. From the 1800s onward it was the center of a lumbering and farming region, and its lakeside summer camps and nearby ski hills have represented “cottage country” for generations. Certainly it played an important role as a transportation corridor, especially prior to the development of the province’s extensive highway system in the twentieth century.

Secrets of Lake Simcoe, which boasts a short bibliography and two-page index, also includes a dozen black and white illustrations. Some of the stories are better than others—the importance of ice harvesting and the apparent quadruple murder on board the Mathilda will likely captivate young readers, but other sections are less compelling or improperly fleshed out. For example, the opening passage notes: “Even a quick look at a map of Ontario reveals [that] … Lake Simcoe dominates the central part of the province.” But readers will look in vain for such a guide to help orient themselves, so little-known places like Fort Willow, Fox Island or Pefferlaw will surely remain a secret for most. There are other minor historical slips (Peregrine Maitland considered moving the capital to the area in 1822, not 1882; our Prime Minister Laurier was Wilfrid not Wilfred) that future editions should address.

Classroom Connections: Aimed at Canadian middle school students, one suspects this book will resonate most with an audience from the Toronto/Barrie/Orillia area of Ontario. Its content generally matches Ontario’s grade eight history curriculum (which focuses on Canada from the 1850s to the Great War) and there certainly is an opportunity to meet the grade eight geography specific expectation to “create and use a variety of maps.”

The 5 Elements of Effective Thinking

The Activity Shoe: How a Simple Teaching Tool...