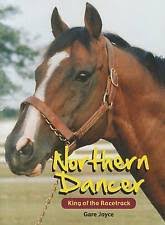 He was short. He was chunky. He was plain. He looked funny when he ran. He was all the things that people expect a great athlete not to be. Northern Dancer was a colt born at Windfields Farm in Oshawa, Ontario. As a yearling, in 1962, nobody wanted him. At auction, no one bid on this little horse that did not conform to the classic look of a great racehorse. Despite this unlikely beginning, Northern Dancer became the first Canadian-bred horse to win the Kentucky Derby. Three weeks later he won the Preakness Stakes in Baltimore and then he went on to win the Queen’s Plate at Woodbine in Toronto. At the end of 1964 Northern Dancer was retired from racing and began his career as a stud. Sports editors voted Northern Dancer into the Canadian Sports Hall of Fame—the first equine member of the Hall. He received many other honours, including a stamp with his picture on it. Over the years Northern Dancer made more money than any other Canadian athlete—even Wayne Gretzky!

Classroom Connections: Northern Dancer is part of the “Larger Than Life Series” from Fitzhenry & Whiteside. Full of non-fiction text features (photos, captions, newspaper and magazine clippings, fact boxes, charts, bold words, timeline, glossary, index, table of contents) this biography would support a study of non-fiction texts as well as being an excellent source of information for research projects. Comparing Northern Dancer to the horse called Gem in the article on Sable Island in the last issue would be a great way to practise making connections (between the two horses, the genres, the history, etc.)

Creating Caring Classrooms: How to Encourage Students to Communicate, Create, and Be Compassionate of Others

Badir and the Beaver

The Flying Squirrel Stowaways: From Nova Scotia to...