One of my all-time favourite picture books is Waiting for the Whales, written by Sheryl McFarlane. The gorgeous text is accompanied by fabulous art, showing more than just the images. The light, the shadows convey moods and feelings. Illustrator Ron Lightburn has worked on many books for children. I asked him some questions to get to know him better.

Margriet: You attended Alberta College of Art. How did you know that you wanted to pursue an art career? Did your parents or teachers encourage you? 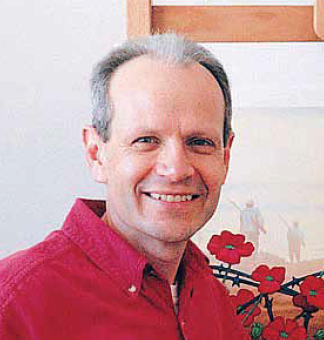 Ron: As a youngster, I became interested in drawing and painting thanks to comic books, Mad magazines, Warner Brothers cartoons, monster movies… Rupert annuals were the first books I owned. I still have them and continue to appreciate Alfred Bestall’s line drawings and storytelling skills. The Marvel comics by Jack Kirby are very cinematic with changing angles and lighting, like storyboards for films. I could follow the stories in these comics before I learned how to read. My parents always encouraged my artistic efforts, but some of my teachers didn’t have a very high opinion of the narrative art that interested me. I wrote and drew comic books in elementary school, selling them to my classmates for a nickel—when they weren’t being confiscated. The subject matter (superheroes, monsters and dinosaurs—the stuff of blockbuster movies these days) was considered to be trash. It helped me develop valuable drawing and storytelling skills that led to a career as an illustrator. When I visit schools now and show kids the comic books I was creating (and hiding) in elementary school, they go crazy and want to see more!

Margriet: What did you do before you became a children’s book illustrator?

Ron: Following art college I worked for department stores in Visual Merchandising, creating displays and signage. It was good experience for utilizing colour, lighting and design skills. Each window display was like a large painting. (I followed in the footsteps of well-known artists such as Salvador Dali and Andy Warhol who created window displays early in their careers.) I also created illustrations for magazines, government publications and advertisements. And was commissioned to illustrate my first book cover, for Your Time, My Time by Ann Walsh. This led to more book covers. Then I learned that Orca, a small Victoria publisher best known for non-fiction titles, had published their first children’s book. I introduced myself to the owner and he viewed my portfolio. Within weeks I was given the manuscript for Waiting for the Whales, and ZOOM—to my surprise I became an award-winning children’s book illustrator! Orca was named publisher of the year and has since become recognized for their fine list of books for young readers. I have since illustrated eleven children’s books.

Margriet: How has illustrating books for children influenced your style, your art, but also the rest of your life?

Ron: I was fortunate to receive the Triple Crown of Canadian illustration awards (the Governor General’s Literary Award, the Amelia Frances Howard-Gibbon Illustrator’s Award, and the Elizabeth Mrazik-Cleaver Award) for my first picture book, Waiting for the Whales. The downside was that I was then pegged as an illustrator of books with sensitive subjects such as death and illness. Subsequently, I was commissioned to illustrate more picture books with these themes. Then one day a young boy asked me, “Do you ever do a book where somebody doesn’t die?” That was a bit of a wake-up call. Since then I have looked for stories to illustrate that aren’t quite so serious in tone. 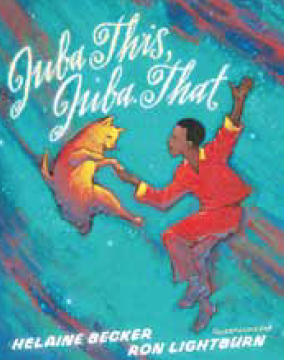 I’m probably best known to the children’s literature community for the realistic style I have used in a number of my picture books such as Waiting for the Whales, How Smudge Came, Wild Girl and Gran and A Poppy Is to Remember. This style requires the use of models and extensive research, so it is refreshing to illustrate books that allow me to work more from my imagination such as I Can’t Sleep!, The Happily Ever Afternoon, Pumpkin People and Juba This, Juba That. Over the years I have worked with ink, pencil, coloured pencils, acrylic paint, watercolour and oil paint.

Margriet: Do you speak in schools? What do you do during a presentation?

Ron: Often I will do a sketch and with older students I can go into more detail about artistic process and techniques. For Pumpkin People my wife Sandra and I demonstrate how to make a pumpkin person using cornstalks and straw. For Juba This, Juba That Sandra performs a hand clapping routine while I read the book aloud. Traditional “juba” rhythms have a long history, originating in Nigeria as hand-clapping games. People who were brought to the New World as slaves transformed “juba” rhythms into work songs that were passed down orally. Juba This, Juba That, written by Helaine Becker, is based on one of the most popular songs.

Margriet: You have illustrated works by many well-established authors. How difficult is it to add visuals to their words?

Ron: My goal is for the words and pictures to be in perfect harmony. I always hope that if I have communicated the emotions and mood of a story properly with my pictures then I have tapped into a universal language. Sometimes there are changes to the text after my preliminary drawings have been approved and the paintings are completed. There isn’t much I can do about that. I’m always waiting to exhale until the author tells me they are pleased with my illustrations.

Margriet: Your newest book will be Roll On, Rick Hansen Wheels Around the World by Ainslie Manson. Tell us a bit about the book and your art for it. 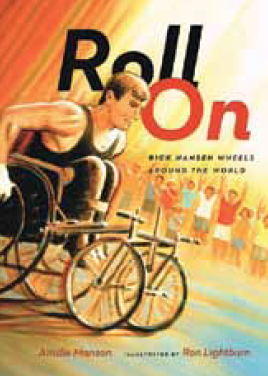 Ron: It has been an honour to have contributed to a book about Rick Hansen, he is such an inspiration. 2012 is the twenty-fifth anniversary of Rick’s Man In Motion World Tour and this picture book will enable a new generation to learn about his incredible wheelchair journey, travelling over 40,000 kilometres to 34 countries. The tour took two years, two months and two days, raising more than $26 million for spinal cord research, rehabilitation and wheelchair sports. One of my objectives as the illustrator was to try to vary the mood in the pictures to reflect the emotional ups and downs of his incredible journey. Even though he had a support team along the way and throngs of supporters to cheer him on, I know it was still an unbelievable struggle that he alone had to overcome mentally, as well as physically. Hopefully, I have been able to impart a small sense of that struggle by showing the rain, snow, cold and heat he had to deal with during that time. Creating the paintings involved a great deal of research about the many countries Rick visited. I was fortunate to have the help of several local students who posed for some of the illustrations, including one young girl who uses a wheelchair.

Margriet Ruurs
Margriet Ruurs is the author of 28 books for children. She conducts author presentations in schools around the country. Margrietruurs.com

This article is from Canadian Teacher Magazine’s Nov/Dec 2012 Issue.

Looking for a Teacher’s Guide for Waiting for the Whales? The Canadian Teacher Marketplace offers one here: https://marketplace.canadianteachermagazine.com/product/waiting-for-the-whales-teachers-guide/