A Reason To Remember

Teaching history is not easy. The truth can be lost to time depending on who is writing the story. I have struggled to make history interesting and engaging to my students, and to help them find meaning in past events. Textbooks do not offer an easy solution.

When Remembrance Day comes around, I teach my students about why we as a country remember on November 11th. Remembrance Day in my classroom is one day in a series of weeks that help my students learn about the sacrifices of our veterans and why we should always remember their service.

I used to rely on the help of colleagues to put me in contact with veterans. However, after moving schools, I needed to find a new way to make contacts, and my principal told me about the Memory Project. Organized and run by the Historica Dominion Institute, the Memory Project is dedicated to preserving the stories of World War II veterans and it assists in booking veterans to speak in classrooms. I had found my resource, but I wondered how easy the booking process would be. After completing a simple request form, all I had to do was wait. And it wasn’t long. This very friendly organization was prompt and provided me with two guest speakers, Don Fowler and Charles Stickney. Both veterans of World War II, they each described their experiences to my students with truth and sincerity. 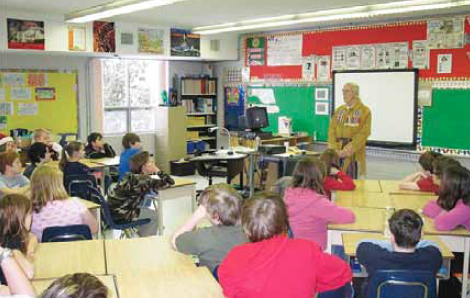 Don Fowler speaking to the class.

Don Fowler was a part of a reserve army unit on Juno Beach. He talked about how, though he was underage, he enlisted so he could join his friends. Don’s descriptions of life in the army and of the loss many soldiers felt struck an emotional chord in my class. Many of my students who play multiple war-based video games were silent as Don shared his feelings with us. The students asked about the many medals Don was wearing, and after a lengthy description, one student asked what his favourite medal was. Don told the class that they, the students, were his favourite medals because seeing them go to school, and having a free life was the best reward. As an identified Metis, Don was asked to attend a recent Remembrance Day ceremony at Juno Beach to help dedicate a statue on behalf of all Aboriginal soldiers. 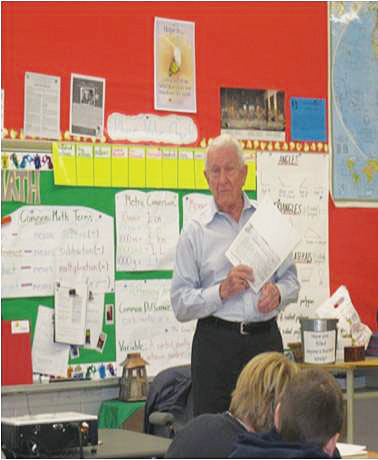 Charles Stickney speaking to the class.

When Charles Stickney enlisted in the Navy, the closest thing he had been to water was jumping off a log raft. At the age of 17 and a half, Charles enlisted and was assigned to the HMCS Sault St. Marie. He described training, his duties and how discipline was so strict that if they were told to jump, they jumped. For his first thirteen months, he never left the ship. When Charles finally gained leave for two days he spent the night at the Salvation Army. It was the first time in thirteen months he had slept between sheets. The woman running the Salvation Army was kind to him and didn’t charge him for the night’s stay.

He told the students how you had two enemies at sea—the weather, and Nazi torpedoes. Being on convoy duty, Charles was involved in many pursuits of German U-Boats (submarines). He described the power of depth charges as it shook his ship, and when actions stations were called, Charles would have a minute and half to get to his position. Everyone on the ship relied on each other to survive. As a signalman, Charles was one of the first on the ship to know about the German surrender in 1945.

In my classroom, both Don and Charles gave a human face to what my students had read about. They were candid and honest about their experiences, with fresh details about a well-documented event. They helped my students see beyond the gore of video games and the glamour of movies that make war out to be an exciting adventure.

History is more meaningful when you have someone who lived it there to teach you. I believe to truly help any student make a meaningful connection to Remembrance Day you should have them listen to a veteran’s story. The Memory Project offers a wealth of stories. Whether you wish to book a speaker or research veterans’ stories, the Memory Project is a resource that is available to all teachers.

Book a veteran speaker at www.thememoryproject.com. It won’t be long when this resource will only be the written word, and the more students speak with and listen to what a World War II veteran has to say in person, the better they will remember.

This article is from Canadian Teacher Magazine’s Sept/Oct 2012 issue.

Attack of the Killer Video Book

Picture This: Out on the Ice in the...

A Full and Rewarding Life, After Teaching