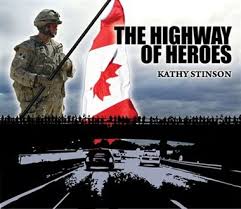 Described as a “photographic picture book” Highway of Heroes offers elementary school teachers one of the few accessible resources on recent Canadian military actions overseas. The first fifteen pages of this work provide a fictional account of a young boy, from somewhere outside of Ontario, participating in the repatriation of his father’s remains. The lad is cold, lonely and sad, but along the road from Trenton to Toronto—a stretch of the 401 series now dubbed “Highway of Heroes”—he discovers thousands of other Canadians have turned out to pay their respects. The second half of this book attempts to explain why this phenomenon has occurred, how the roadway earned that official designation in 2007, and why Canadians have been dying in Afghanistan since that first “friendly fire” incident in April 2002. Admittedly this is a challenging topic for young readers, and the author chooses to focus on Canadian humanitarian activities in that region. One can well understand why Stinson also refused to offer a final tally of fallen combatants (somewhere around twenty more processions travelled that stretch since her text was completed). Still, along with defining “insurgents” and explaining the World Trade Centre attacks, the book could have spared a half-page to discuss some other complexities of the conflict (whether it be corruption or detainees). It should be noted some of the proceeds are going to charities, including Wounded Warriors and UNICEF.