What Writers Are Reading: Inspiration for Your Summer Booklist

As a writer I am often asked “What is the best advice you can give to someone who wants to write?” Invariably I notice that many of my writing colleagues give the same answer to that question as I do: “Read! Read books aimed at the audience for which you write. Read fiction! Read poetry! Read nonfiction! Then read some more!”

“So what,” I wondered aloud, “are the writers themselves reading? Do they really read what their peers are producing, what Canadian publishers are offering, what interests them?” The answer is: they do! Here is a cornucopia of favourite books written by some of Canada’s foremost children’s and YA authors, as read and recommended by their friends and colleagues.

According to Marsha Skrypuch, author of many books including Making Bombs for Hitler and Last Airlift, “The hands-down best Canadian YA novel I’ve read in the last while is Karma by Cathy Ostlere. This book is a historical thriller written in verse. Can you get better than that?” Recognitions include: Canadian Library Assoc. 2012 Young Adult Book Award, shortlist; Ontario Library Assoc. 2012 Best Bets List, Honourable Mention; YALSA, 2012 Best Fiction for Young Adults; BookList, 2012 Editor’s Choice, Best Books for Young Adults.

BookList calls this book “a fascinating, epic page-turner.” Aimed at Grades 9 to 12, the story is placed in 1984 when 15-year-old Maya and her Sikh father travel from Canada to India for a traditional burial of her mother. On the night of their arrival in New Delhi, Prime Minister Indira Gandhi is assassinated by Sikh guards. The city as well as Maya and her father, find themselves in turmoil and danger. When she is accidentally separated from her father, Maya finds herself alone in a foreign country, facing dangers at every turn. This free verse novel is skillfully crafted to show cultural clashes and intrigue. 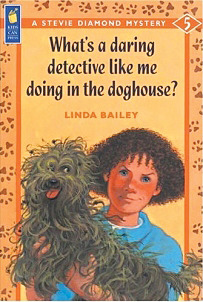 Author/illustrator Dianna Bonder (Dogabet, The West Is Calling) says, “My young daughter Ekko and I just finished one of the Stevie Diamond books and it was wonderful, so I would definitely recommend this read to everyone.” The fifth book in the best-selling Stevie Diamond Mystery series, What’s a daring detective like me doing in the doghouse? stars a pair of true-to-life kids who love nothing better than to solve mysteries. Stevie and Jessie find a lost dog in Vancouver and accidentally dye it green before discovering that the dog belongs to the visiting American president—and that it has been stolen! Can they undo the dye job and catch the thief all in one short week? As the plot thickens with a host of suspicious characters, mystery fans are guaranteed a fast-paced, funny and compelling adventure that will keep them guessing to the end.

Dianna says, “My daughter and I read this book together at bedtime over a period of several weeks and it was always a challenge to bookmark the page and turn off the lights. It was so exciting we just didn’t want to stop reading! Linda Bailey has such a skillful way of spinning a mystery with hilarious situations and language that leaves you with a stitch in your side. When Stevie and Jesse dyed the stolen dog green… well, I don’t think I could have asked for a funnier plot-line than that! Linda’s stories are sophisticated and incredibly well written and appeal to both young and old. They are simple in form but complex and rich in detail. I am not normally a fan of mystery novels, however, the Stevie Diamond mysteries are riveting and kept me on the edge of my seat. My daughter thoroughly enjoyed this book and is already asking to read the others in this series. A great read and a definite must for any summer wish list!”

Author Karen Autio lives in Kelowna BC and has written several historical novels. She enjoys reading this genre as well, and says, “One of my recent favourite Canadian YA novels is Wild Geese by Caroline Pignat. Wild Geese, the sequel to Greener Grass, is Kit Byrne’s immigration story as she flees Ireland in 1847, endures a terrible ocean crossing and quarantine at Grosse Ile, Quebec, and ends up in Bytown (now Ottawa), all for the purpose of reuniting her family in Canada. While the historical time and events on which the story is based are fascinating, I am captivated by Kit’s voice. Here are a couple of samples:

Wild Geese was a finalist for the 2011 Geoffrey Bilson Award for Historical Fiction for Young People. “As an author of historical fiction,” Karen Autio says, “one of my goals is to read all books that qualify as finalists for this award in order to develop and strengthen my writing.”

Joan Marie Galat, from Edmonton, AB, recommends Ghost Messages by Alberta author Jacqueline Guest. This is the story of Ailish O’Connor who supports herself and her father with fortune telling skills. Their gypsy caravan travels from one place to another looking for crowds to earn their living. In Ireland in 1865, the place to be is on the west coast, as people gather to launch the largest ship ever built, the Great Eastern. Its mission is to lay the first undersea telegraph cable across the Atlantic Ocean, to Newfoundland. Ghost Messages is a Moonbeam Award Gold Medalist and a nominee for the OLA Forest of Reading Silver Birch Award for Fiction.

Valerie Sherard, author of many books including Testify, says, “I’ve spent days trying to narrow my choice of favourite YA novel down to one book—there are so many fantastic Canadian YA novels! The final contenders were Dust by Art Slade, Alice, I Think by Susan Juby and Shoulder the Sky by Lesley Choyce. Based on the likelihood that someone else will send in the Slade and Juby titles, I’ve finally settled on the Choyce book.” Indeed, many other authors favour Dust and Alice, I Think. Shoulder the Sky is the story of Martin Emerson, whose non-reaction to his mother’s death have those in his life worried, particularly in light of his increasingly bizarre behaviour. His website, Emerso.com allows us to glimpse more complex thoughts and questions from Emerson. “I loved this story,” Valerie says, “because it was intelligent and sophisticated, and most of all because of its powerful voice.”

Canadian bestselling author Sylvia McNicoll, (Jump Start, Walking A Thin Line) selected as her favourite YA novels of the past little while, two books by Beverly Brenna, Wild Orchid and Waiting for No One, both published by Red Deer Press.

Taylor Jane is the irresistibly funny teen main character of both books. She seems to have no inner censor and so says and does some absurd things in a touchingly sincere fashion. Turns out she has Asperger’s Syndrome. Sylvia says, “I didn’t know much about autism before but this book is life changing. Now when people behave or speak in an odd way, I’m more understanding. Also I understand that I’m too bright and loud for some people’s sensibilities sometimes, whether they have Asperger’s or are just hypersensitive to stimulus for other reasons.”

Sylvia goes on to share, “I also loved Soames on the Range by Nancy Belgue. Soames’s dad breaks up with his mom to move in with a beloved boyfriend. Because Soames lives in a small town and because he most resembles and behaves like his Dad, this causes more angst and drama than one would ever imagine. Soames loves to cook too, which gives the story an odd positive twist in the end.”

Check out the authors who contributed their favourite reads:

Margriet Ruurs
Margriet Ruurs is a Canadian author. Her latest book AMAZING ANIMALS (Tundra) is currently being considered for the 2012 Information Book Award. One of her favourite Canadian YA novels is The Bite of the Mango by Mariatu Kamara with Susan McClelland.

The Extra Mile: A Mini Bio of Colin...