When we began our own retirement journeys a decade ago they were shaping up to be considerably different from that experienced by former generations, and sure enough, our retirements are quite unlike our mothers’ generations! Now, however, as we move through the second decade of the twenty-first century, the face of retirement is changing again. People have different concerns and goals and many are continuing to work well past what was considered to be retirement age ten years ago. Having said that, teachers as a group still tend to retire from their primary careers around the same age we did, and then move on to totally new income-generating endeavours.

Throughout the years of writing about and working in the field of retirement planning, we’ve noted that many people can’t see the forest for the trees. This can be especially true of educators who, even though they have spent their careers helping others achieve success, often don’t see that they too can be successful outside of teaching. In our columns we have reiterated that teachers are full of ideas, and not only do they have incredible ideas, they are also good at identifying problems and coming up with innovative and creative solutions. Yet, once educators are retired they often can’t seem to figure out how to use the incredible bag of tricks that are a teacher’s skill set; to take one of those marvelous ideas, move it forward and try something they’ve never done before—in other words to think outside the box and do it!

In our article in the last issue we introduced some steps that have been proven to work at moving things along, from creating ideas to enhancing them and eventually implementing them. Why and how did we devise this concept and process? Quite simply it was out of necessity—we had an idea for a book that we wanted to develop. Once we had formulated our idea beyond just a thought, we massaged it and although we weren’t quite sure how we would make the idea work, we set about enhancing it. So we brainstormed together and alone, we wrote things down and sometimes tore them up only to revive them and take a second look. We had eureka moments and ones of sheer desperation when nothing seemed right; but through it all, the basic idea grew and eventually became a finished product that we wanted to bring into the public arena. This particular aspect proved to be relatively easy for us, because just as we had searched for answers about our retirement, so were many others searching, and our idea became the successful and still relevant book Transition to Retirement: the Uncharted Course.

Because of the book and accompanying workshop, people began asking us for help in getting them out of the trees so that they could see the forest. Although all of these private clients were looking for help in focusing on an idea and moving it and their lives forward, each person’s circumstances and requested support were unique.

One of our first clients was a newly retired couple who had a lovely, old, wooden boat. They had the idea that they’d like to do something with the boat that would earn an income. While they were clear about some things, they didn’t quite know how to develop their idea. So, during our initial sessions we helped them to focus on their myriad skills and what they enjoyed doing with the boat. They soon realized that what they really wanted was to use their boat to show people around the harbour and to explore the coast while sharing interesting historical and geographical information, as well as showcasing their culinary skills. Eventually, after some serious brainstorming, they decided that specialty day cruises would be the best way for them to enhance their idea. This basic idea was then worked with until they had decided on three themes for the cruises, the length of each cruise, the menus they would use and the routes they would follow. From this point, the idea was advanced by deciding where and how to advertise. All of this was then implemented and for several years was a successful and charming addition to the local waterfront during the tourist season.

Another client had a knack for translating and she had a fairly clear idea of what she wanted to do, but she wasn’t sure if it would work, or how she could move forward with the idea. Having worked in Japan for some time and having lived with a Japanese person, she spoke the language fluently. Because of these factors and her own research she thought there was a market for certain Japanese books to be translated into English and used in ESL schools in Japan. Editing and translating were something she enjoyed and it was also something that she could do anywhere while allowing her and her partner to live the rural lifestyle they had worked hard to achieve. During our first session we simply helped her clarify exactly what she thought she would and could do; we then elicited a list of reasons why she thought this idea would work. Once she had used us as her sounding board and saw her reasons in black and white, she had no doubt that her concept was viable, and from there we simply helped her consider how to advertise her service using her existing contacts.

Our final example is a client who had, over the years, developed an interest in and a palate for good wine. After retirement, he did much the same as many people do—simply enjoyed doing nothing until he realized he really wanted to do something.

Because of his love of the grape and a desire to work with people, he asked for advice as to how best to pursue a new career. It was almost a no-brainer, but as with many people, he was unsure of how to proceed. All he needed was to have the opportunity and time to figure out if his general idea had merit, and if so what to do. We spent time discussing how he could best combine his love and knowledge of wine with the skill set he’d honed during his career. He quickly realized that rather than selling wine, which had been his original idea, he would much prefer working in a vineyard that had a commercial outlet, where he could help people enjoy and learn about the wine they’d come to taste and possibly purchase, and to this day that’s just what he’s doing and he is a happy man.

These clients had different needs when they came to us, depending on whether they had a relatively clear idea or a more nebulous one, but in each case we helped them examine the idea, enhance and advance it, so that each could implement the concept successfully while using the skills they had developed in their primary career. Each idea and outcome was different, but all these people charted totally new courses in retirement and are now enjoying the journeys on which they embarked, just as we did. If that is what you want to do in retirement, you too can take your idea and pursue it! 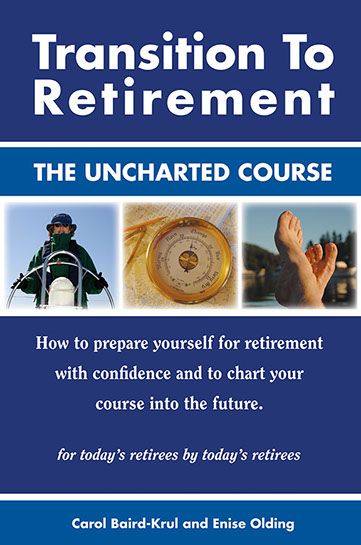 Transition to Retirement: The Uncharted Course

What can you expect to experience—joy, relief, freedom, boredom, loss of identity, a lack of structure?

This book will help you recognize the markers on your life’s chart and plot a course for smooth sailing into retirement.

Enise Olding and Carol Baird-Krul
Carol and Enise (info@drassociates.ca) are the creators of a series of pre-retirement and post-retirement planning workshops: Transition to Retirement: The Uncharted Course©, Recently Retired: Charting a New Course© and Ideas… Enhanced and Advanced©, and authors of Transition to Retirement: The Uncharted Course. Previous articles on retirement may be viewed in back issues at www.CanadianTeacherMagazine.com

Learners Without Borders: An Opportunity for Students To Give and Receive

Breaking Through the “I Don’t Knows”: Five Practical...