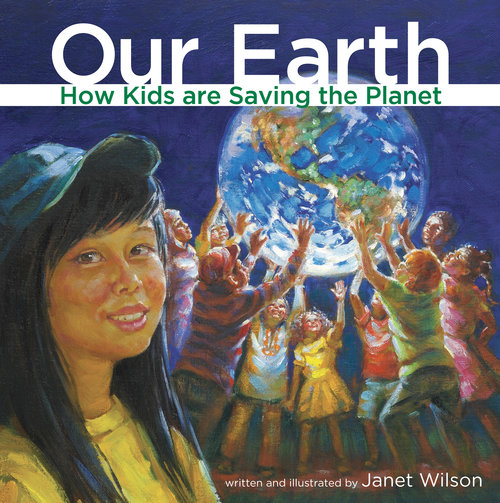 A windmill built from bicycle parts, a bridge built for a monkey, and a touch of magic. These are just some of the extraordinary projects initiated by children from around the world. Each child had a vision of doing something to make a positive change to our planet. Ten of these determined youngsters are highlighted in this book. You will read about young Canadians such as Severn Cullis-Suzuki who, at the age of nine addressed an environmental conference in Rio de Janeiro, Brazil. There is also Ryan Hreljac who raised $70 to buy a water pump for a village in Africa when he was six. Since then, the Ryan’s Well Foundation has raised millions of dollars to support more than five hundred water projects in sixteen countries. The children profiled from outside of Canada include fourteen-year-old William Kamkwamba. He studied a photograph of a windmill and then built one out of scrap timber, rusty nails and spare parts from a bicycle and a tractor. That windmill produced the first electric light in his village of Masitala in Malawi. Our Earth features a profile, photograph and a portrait (by the author) of each of these inspiring young people and concludes with a list of possible ideas for children to implement in their own communities.

Classroom Connections: The children highlighted in this book were all environmentally aware and ready to take some kind of action. Each story provides the teacher with an opportunity to guide students to make connections to their own communities and to explore the concept of transformation as an effective reading strategy.

This review is from Canadian Teacher Magazine’s Mar/Apr 2012 issue.

Environmentalists from our First Nations

If This Is Freedom

Piece by Piece: Stories about Fitting into Canada