2011 was a landmark year for the American space program. It was the 50th anniversary of America launching its first astronaut into space as well as the 30th and final year of the space shuttle program. Having grown up during the early part of the space era and been fascinated by the exploration of space ever since learning about Sputnik and watching Neil Armstrong take his “one small step for man,” I wanted to visit the Kennedy Space Center to see close up the amazing technology that has taken men to the moon and given us a view into space. 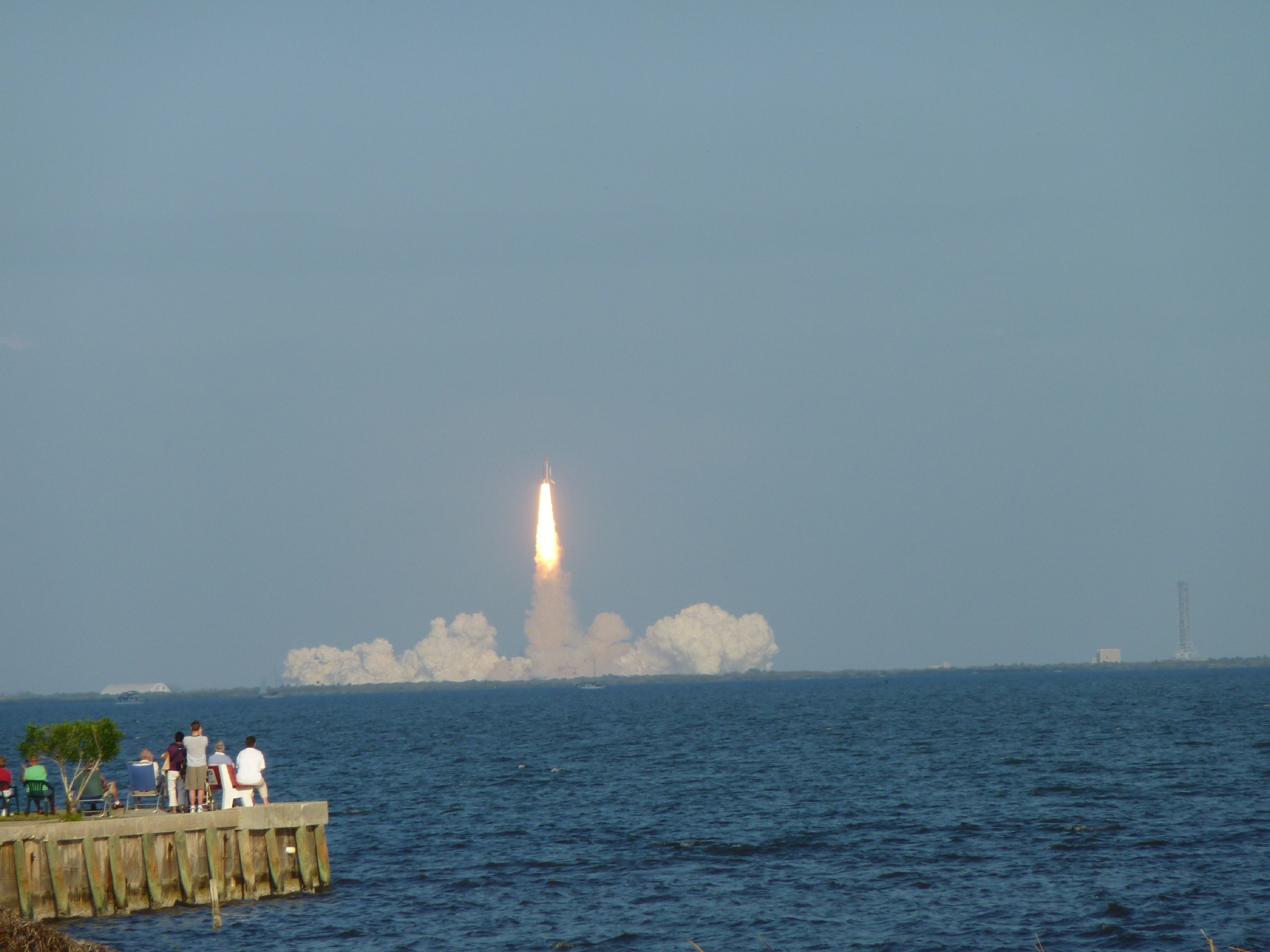 The Kennedy Space Center is located on Florida’s Atlantic coast, not far from Orlando. It’s a short drive to the Visitor Center from Orlando or nearby towns, or you can take one of the many coach tours that are available. Whichever way you get there, be sure to plan your visit ahead of time since the site can be very busy. The price of admission allows you two days to visit the Kennedy Space Center and the Astronaut Hall of Fame in nearby Titusville. It includes a two-hour bus tour through the Kennedy Space Center with stops at various points of interest. These tours begin at 10 a.m. and run every fifteen minutes. 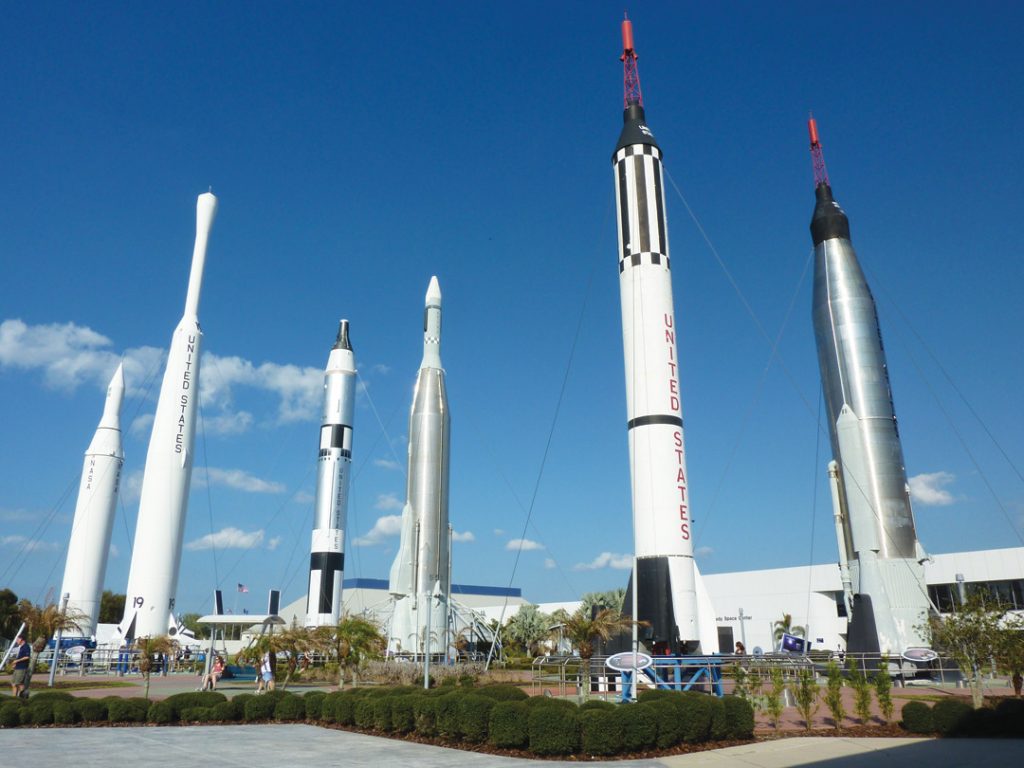 For an additional fee you can participate in special programs such as guided tours and lunch with an astronaut. There are also week-long summer programs for children and overnight camp-outs for youth and school groups. NASA welcomes schools to the Kennedy Space Center and has an Educator Resource Center for teachers and students. They provide workshops on subjects like rocketry, living in space, math in space and robotics.

I stayed nearby in Cocoa Beach for a few days to take advantage of the two-day pass, and spent an entire day at the Kennedy Space Center as well as half a day at the Astronaut Hall of Fame. If you have an interest in space then it’s all there. At the Kennedy Space Center you can see displays that explain the development of the American space program and experience a shuttle launch in a simulator. There is the full-scale replica shuttle Explorer to tour, an interactive display for children, and the Rocket Garden where you will see examples of the rockets used to launch astronauts and satellites into space over the last five decades, including the Redstone, Atlas and Titan. Climb into the Mercury, Gemini, and Apollo capsules on display to experience how tiny these space vehicles were and you will gain an appreciation for the fearlessness of the astronauts that rode in them.

The bus tour will take you around the complex to see the Vehicle Assembly Building where rockets are prepared for launch. It was originally built to assemble the Saturn rockets and Apollo capsules and later modified for the shuttle program. At 160 metres tall, the building is more than twice the height of the Statue of Liberty (measured from base to torch) and has the tallest doors in the world with an opening of 139 metres. From here you will see the Crawler Transporter that delivers the space vehicles to the launch pads and the specially-built roadway designed to support their massive combined weight. The tour will take you to the observation gantry for a panoramic view of the Launch Control Center, the Vehicle Assembly Building and the launch pads where you may see preparations being made for an upcoming mission. 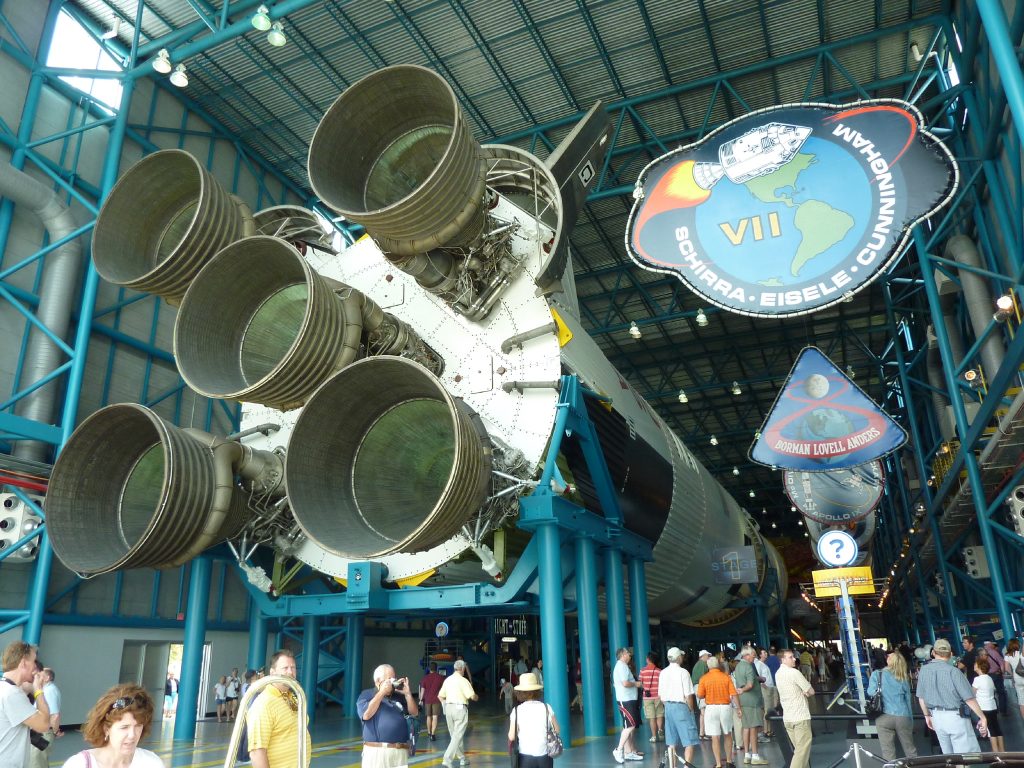 This tour also takes you to the Apollo/Saturn V Center that features a 110 metre Saturn V rocket, the largest and most powerful rocket ever made. This is the type of rocket that propelled American astronauts into space on their way to the first lunar orbit in 1968. The rocket is held aloft horizontally with its stages separated, complete with lunar command module, so that you can walk around and under it to appreciate the scale of the entire vehicle. Here, too, you can see the lunar rover, touch a moon rock estimated to be 3.7 billion years old, and see a collection of Apollo mission artifacts like the space suits worn by the men who walked on the moon.

There is a cafeteria at Apollo/Saturn V Center as well as other facilities at the Visitor Center to eat or relax so you won’t have to feel rushed. And of course, there are two well-supplied gift shops where you can find souvenirs of your visit.

An interesting aspect of the Kennedy Space Center for me is how it fits into the sensitive Florida environment. The 56,700 hectare Merritt Island National Wildlife Refuge was established in 1963 as an “overlay” of the Kennedy Space Center and is part of the U.S. Fish and Wildlife National Wildlife Refuge System. It contains a variety of coastal, saltwater and freshwater habitats, supporting over 1500 species of plants and animals. On the bus tour the guide pointed out giant nests that have been occupied by generations of bald eagles, the protected wetlands that support alligators and waterfowl, and kilometres of waterways that allow the movement of water through the entire area. 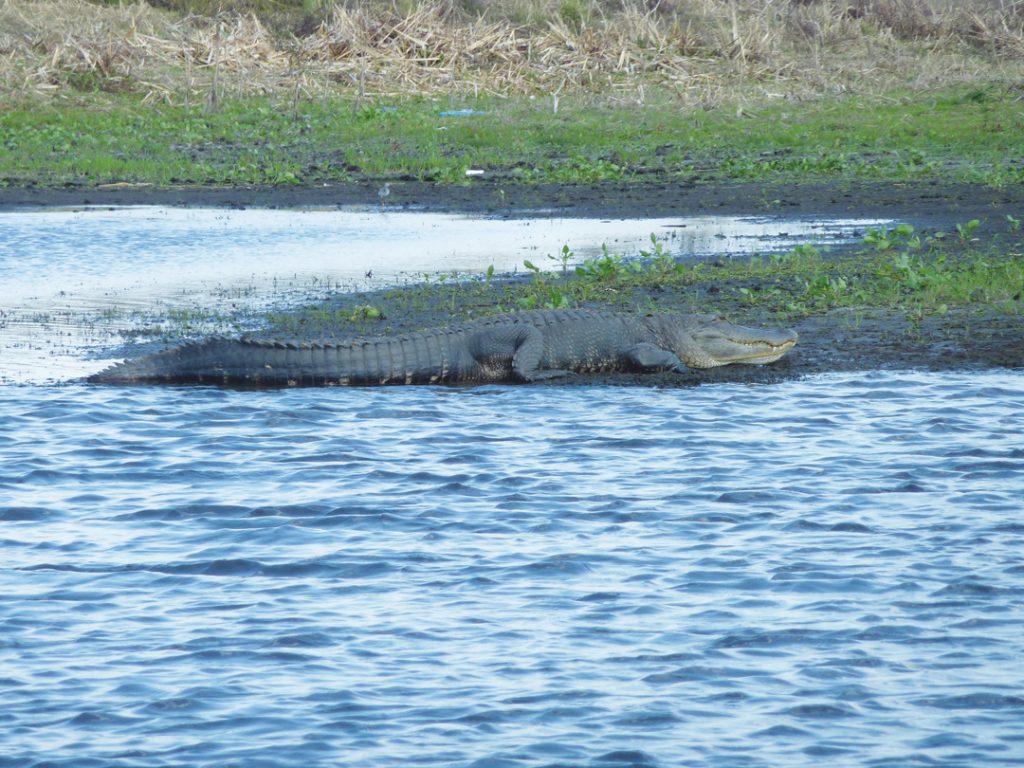 Crossing the Indian River causeway takes you to the U.S. Astronaut Hall of Fame. It claims to house “the largest collection of personal astronaut memorabilia ever assembled” and from what I saw there I believe it. There is an incredible variety of items. The displays include copies of Life Magazine from the era, profiles of every astronaut who has ever trained there, displays of space suits, uniforms and equipment plus Mercury and Gemini capsules. You can even take a ride in a G-force trainer that will spin you around until you experience up to four times the force of gravity. If interactive exploration is what you want, then try using the simulators to dock a vehicle with the space station or land a space shuttle. 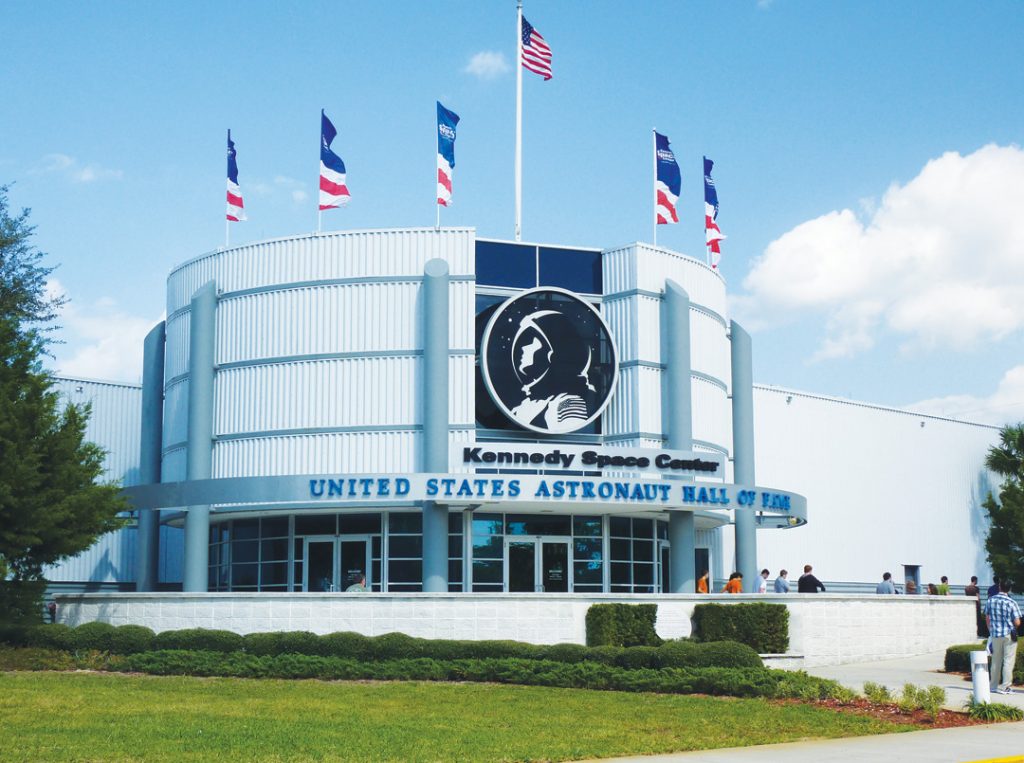 I was fortunate enough to be able to travel to Florida in February to see the last launch of space shuttle Discovery. I arrived two days before the scheduled launch so that I could see Discovery on the launch pad during the bus tour of the Kennedy Space Center, if only from the underside that houses the big orange external fuel tank and the two reusable solid rocket boosters. This was to be the 133rd shuttle launch and the second-last one before NASA mothballed the fleet (the 135th launch in July was added later) so the media was predicting a lot of interest.

With that in mind I took a hotel nearer the waterfront parks that dot the Titusville coastline, known locally as the “Space Coast,” where I would watch the launch. These parks are about thirteen kilometres from the launch pad and provide good views. I arrived before dawn for the 4:50 p.m. launch and was soon joined by increasing crowds of people until by noon the shoreline was overflowing with visitors. People were very friendly and the atmosphere was like a big country fair. I met people from all over the U.S., some who had driven from as far away as Virginia and Colorado to see the launch and others who had come across the event as they were driving somewhere else and just decided to stay to watch.

The event was not without drama. Just five minutes before launch, NASA discovered a problem with a downrange computer and stopped the countdown. With only a ten-minute launch window, that meant that the technicians had only five minutes to fix the problem. There were tense moments until, with less than twenty seconds remaining, the countdown was restarted and a cheer erupted from the crowd, audible, it seemed, from miles away down the beach. The crowd counted down the last ten seconds in unison until liftoff and the huge plume of steam erupted from the launch pad. Everyone cheered again as Discovery rose above the steam cloud into the sky. It took about thirty seconds for the sound to reach us, the concussion of the rockets arriving with a trembling roar. There were more cheers and applause and the shuttle arced away from the earth, higher and faster, finally discarding the solid rocket boosters just as it was disappearing from sight. 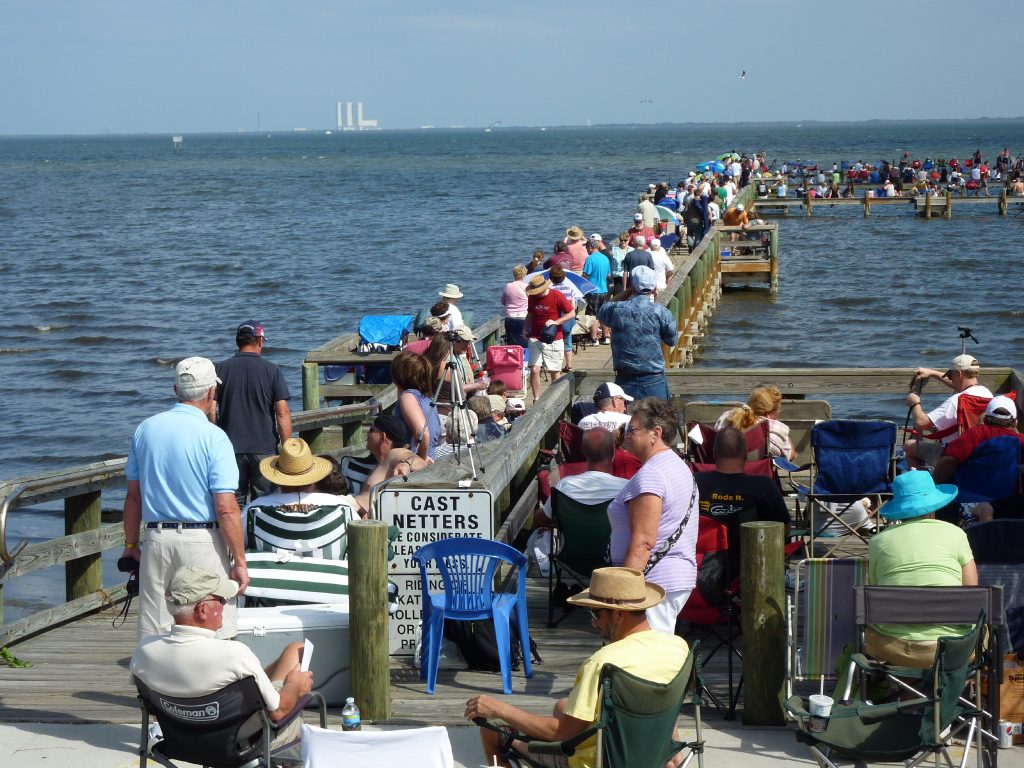 With the end of the shuttle program the U.S. has announced that it will place the decommissioned shuttles for public viewing at four sites around America. Atlantis will return home to the Kennedy Space Center and the others will be housed at the Smithsonian in Virginia and at museums in New York and Los Angeles.

There will be no more shuttle missions but there is still a lot of activity at Cape Canaveral and always more launches to see, like the recent launch of the new Mars rover Curiosity. For now, though, American astronauts will be delivered into orbit by Russian rockets. Private corporations are expected to be ready to take over by the middle of the decade.

As NASA completes its programs at the space station and continues with its plans to return to the moon and reach further out into space to land astronauts on Mars, there will no doubt be new exhibits coming to the Kennedy Space Center. I will surely be going back.

Picture This: Out on the Ice in the...