This article provides a little peek at one of the well attended sessions at the 2011 Vancouver Island Children’s Book Festival. Bookfest is an event that is organized by a dedicated group of volunteers for the families of Nanaimo and the surrounding area. Authors and illustrators gather to speak directly to children about writing, illustrating and making books in a day-long event held in May each year. This festival celebrated its 25th anniversary on Saturday, May 7, 2011.

It is ten o’clock on a rainy Saturday morning. The children’s section in the basement of the Literacy Nanaimo building is filled with an air of anticipation. A crowd of young people, sitting on colourful floor mats, fills up all the available floor space. Parents are perched on chairs and benches along the back wall. They are all here to visit with the well known Canadian author and illustrator, Eugenie Fernandes. When everyone is settled in she begins…

So off we go into a fun filled hour packed with stories, drawing demonstrations, and a look at the illustrative techniques used by Eugenie in her books. She often uses plasticine and a wide variety of found objects to create the pictures in the books for which she is famous. She quickly teaches the audience some of her little tricks with the plasticine and provides each child with a printed recipe for home made modeling clay and step by step instructions for creating an imaginative creature. 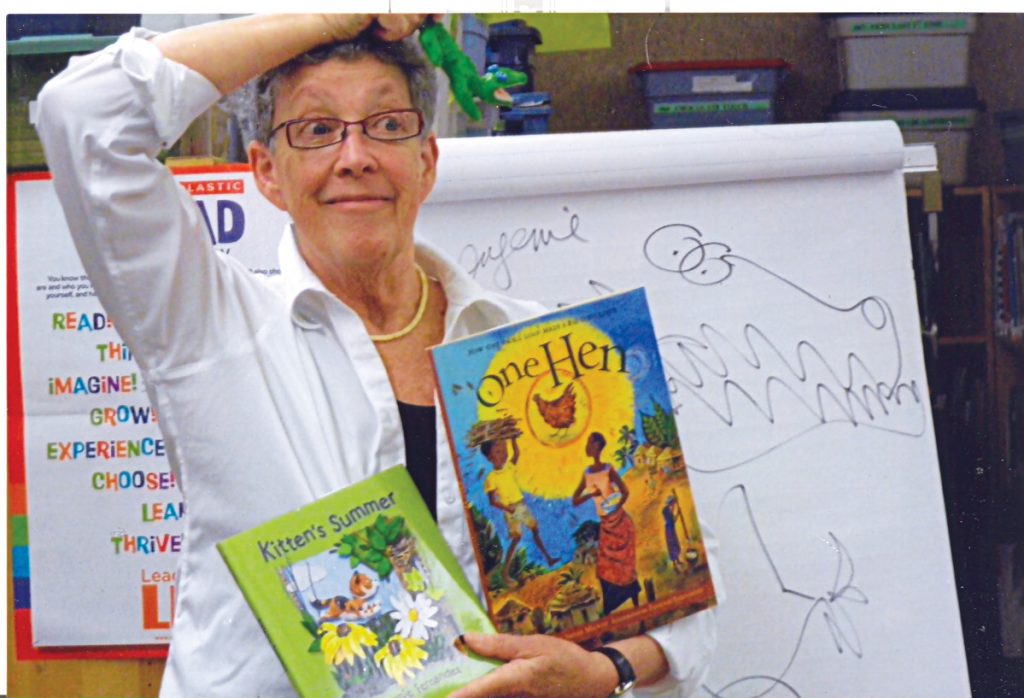 Eugenie is visiting us from Peterborough, Ontario. Her home studio is set in a wooded area which provides her with lots of opportunity to observe birds and other small creatures that live there. She tells her audience that, as a child, she loved to explore outdoors and often recorded her adventures in her own little books. As an adult she has continued to combine this interest in nature with bookmaking. She now has an impressive list of titles, many of which are found in classrooms and libraries right across the country.

In September 2011, Eugenie published the fourth in her series of little kitten books. Kitten’s Winter is written in simple rhyming text and tells the story of the kitten’s struggle to reach home on a stormy winter’s day. As kitten hurries and scurries through the blizzard we are treated to a glimpse of the wild creatures living in the fields and woodlands surrounding the farmhouse. After sharing the story with her audience Eugenie delighted the children by producing one of the original pieces of artwork used to illustrate the story. 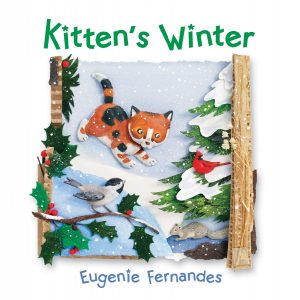 Some other titles by Eugenie include:

1986
The Nanaimo Children’s Literature Roundtable was formed for the sole purpose of presenting Canadian children’s authors and illustrators to local children. The first year the event was organized by a group of teachers, booksellers and librarians.

1987
The second year Malaspina College (now Vancouver Island University) became a sponsor and provided an on-campus site for the festival which was held on the first Saturday in May. Face painting, bubble blowing, bookmark making and musical acts were some of the events offered over the lunch time. Hundreds of children lined up for the book signing at the end of the day’s sessions.

1988 – 2010
A scholarship program was set up for children who do not have the money to attend the event. The tickets were distributed through the school district.

Committees were formed to take care of fund raising (for the cost of the reading fees and travel expenses of the authors, as well as the noon hour entertainment). The authors were billeted and fed in the homes of the volunteers.

An online Art Auction was established as a fundraiser. The art pieces were donated by the book illustrators presenting at the event.

A committee was formed to book authors into schools for readings before and after the festival. Authors and illustrators often stay on for a week or two after the festival to visit local schools and libraries. This means that in addition to the 500 to 1,000 people who attend Bookfest, another 6,000 to 9,500 children hear the authors in their schools or public libraries. During the 25 years of the festival’s history, over 150,000 children have had the opportunity to listen to a Canadian author or illustrator. Transportation of the authors to the schools was provided by volunteers.

The Vancouver Island Regional Library offered a Mother Goose program for parents, babies and toddlers during the day of the festival.

2011
The 25th anniversary celebration was held. The reading sessions and activities were moved from the university campus to venues throughout the downtown area.

2012
Visit www.bookfest.ca for information about this year’s Bookfest.

Thinking that this is an idea worth considering in your community? Here are some of the highlights in the Bookfest timetable. For more detailed information you can check out their website: www.bookfest.ca

Classroom Collisions: Children on the Wrong Side of...