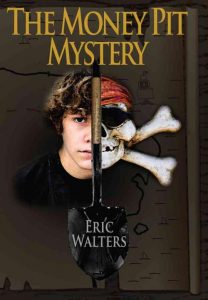 Eric Walters has created a wonderful and powerful novel combining the thrill of a treasure hunt with the difficulties of family dynamics. Being the annoying younger brother, Sam is frustrated that his sister pays no attention to him and his passion for magic. Sam doesn’t understand Beth’s interest in boys and is annoyed that he has to fight with her for attention from Buzz, their island friend. To complicate matters more, their grandfather is becoming more and more forgetful, to the point where the local doctor thinks he may be developing Alzheimer’s and takes away his driver’s license. It’s enough for the whole family to worry about!

But at the heart of it all is where their grandfather has been spending all his time and money—at the Money Pit, where rumours have it Captain Kidd’s treasure is buried. Also, his house is filled with more than a dozen cats and his bills have been unpaid for years—since the time their mother had a fight with him and stopped their yearly visits. Sam and Beth are worried for their grandfather but they’re also excited to be back on the island, back with their grandfather, and back treasure hunting. Their energy and enthusiasm to solve the mystery of the Money Pit overshadow the hardship of the family troubles. As with all good mystery stories, it all works out in the end. This is a great novel for older children and younger adolescents as it spans a range of interests from magic tricks and treasure hunting to dating and family troubles. A great read all around—and a great mystery, too!

Classroom Connections: Great for a classroom library or as a read-aloud. Not as focussed for literature circles as its strengths lie in the vivid imagery and the suspense of the mystery. A great text for encouraging students to make connections and to initiate classroom discussions about aging grandparents, family difficulties, and the importance of balancing personal goals and dreams with the day-to-day responsibilities in life.

This review is from Canadian Teacher Magazine’s Jan/Feb 2012 issue.

Book Ends: A Year Between the Covers

Storm the Fortress: The Siege of Quebec