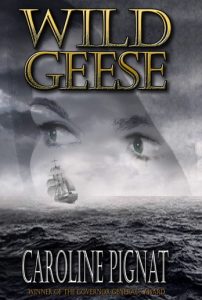 “I should be dead by now. Some days I wish I was. My eyes have seen enough sorrow; I just want to close them to its sting. But there is something inside me that pushes on.” The opening words of this book are spoken by Kit Byrne. It is the summer of 1847. Kit disguises herself as a boy and flees the famine in Ireland with her friend Mick O’Tool. Desperate to reunite with her family, who are travelling to Canada on another ship, Kit endures the hardships of the six-week voyage only to find herself sick in quarantine at Grosse Isle. Weakened by the typhoid fever, Kit pushes on with her search and eventually makes her way to Upper Canada. On reaching Bytown (later known as Ottawa) Kit is offered shelter by Mother Bruyere and her Sisters of Charity. Over three thousand Irish immigrants arrived in Bytown that summer and Kit is kept busy helping the sisters with the care of the poor, the sick and the many children orphaned by the typhoid epedimic.

Classroom Connections: This book is a work of historical fiction but Mother Bruyere, the Sisters of Charity, Father Cazeau and Dr. Douglas were real people who worked, regardless of the danger of contracting the disease, to care for the immigrants who arrived from Ireland that summer. Although some of the dates are modified and some of the characters fictionalized to fit the story, this Governor General’s Literary Award-winning author has included as much historical fact as possible. The book’s content makes it a good fit for many aspects of the Social Studies curriculum at multiple grade levels. Besides the obvious themes of immigration, struggle and survival there are subtle shifts in some of the characters’ perceptions that also make this book a good tool for discussion—it would be great for literature circles. Predicting, questioning and inferring are the three major reading strategies that could be modeled effectively when using this book in the classroom.

Get Me Out Of This Book!