How Virtual Computing Helped Save Our Elementary School Computer Labs

Here’s a scenario that might seem all too familiar in schools these days. You need to create a thirty-seat computer lab, but you have a limited budget and purchasing thirty individual computers is way out of reach.

That said, you want your students to be working on up-to-date hardware and software, so here’s another approach. Instead of buying thirty computers, you select IT technology that allows you to use only one large computer in your lab and thirty students could work on it simultaneously. Each child would feel like they have their own computer, with their own monitor, mouse and a keyboard and would be engaged in their own project. The “brain” of the operation would come from the one computer. This PC would contain some very powerful software that works with a small but also powerful hardware device to enable this functionality.

Sounds like science fiction? Actually it’s real. It’s called Desktop Virtualization and this technology allows the schools of the Rocky Mountain School District in BC to provide state-of-the-art computing resources to save money as well as reduce their carbon footprint.

In this article, I will share out how my colleague, Dave Hlady, and I worked with technology and service providers NComputing and BlueCurl to install Desktop Virtualization at Lindsay Park Elementary and Edgewater Elementary schools. This technology is allowing two of our schools to provide students with the opportunity to learn on the most up-to-date computing equipment at a fraction of the cost.

Pennies and Pencils in My Computer 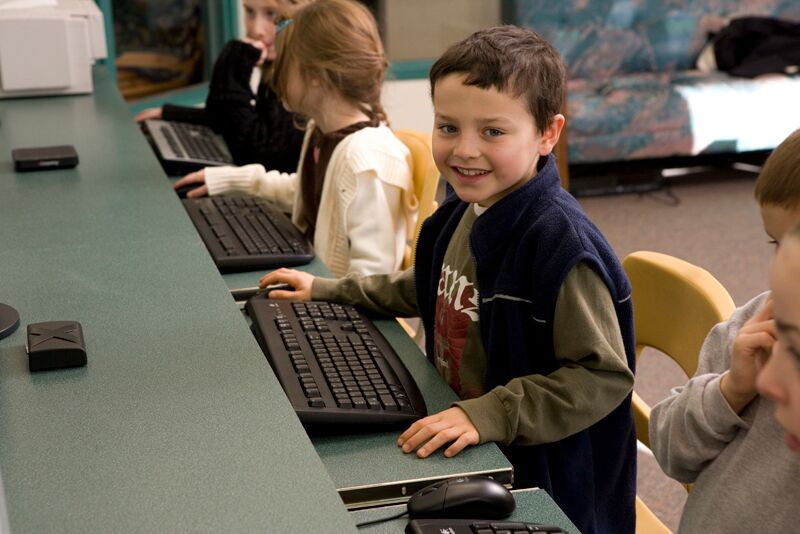 One very effective way to save money on computer equipment is to buy refurbished computers for the labs and classrooms. Dave and I discussed this option but ultimately decided that while the quality of the equipment can be satisfactory, we found that the refurbished computers would only have a life expectancy of three years before having to change them out again. In addition, these computers were expensive to maintain, especially when little hands decide to jam pennies and pencils into the equipment ventilation slots. Suffice it to say, it takes a lot of maintenance, not to mention a lot of electricity.

From an aesthetic point of view, the PCs were too large for the desks, making it impossible for students to have textbooks and notes on the desk while they typed on the keyboard, and they were also very loud thanks to twenty-eight fans running simultaneously in the computer lab.

Combined with our continued high energy costs, we knew we had to find a better way. Looking at the economics of Lindsay Park alone, purchasing thirty refurbished computers for that lab would cost more than $30,000. Add that to the cost of furnishing computers for thirty labs in twenty schools—we were at a loss.

That is when we were presented with the idea of installing desktop virtualization hardware and software. Our IT provider, BlueCurl, suggested we use technology from a company called NComputing— one of the largest desktop virtualization software companies in the world. We did our research and found that NComputing had an easy-to-deploy solution that could be implemented with minimum training. As a matter of fact, NComputing had won awards for their innovative solutions—and with that knowledge we took a leap of faith.

Here is the premise behind desktop virtualization: PCs are so powerful that the vast majority of applications use only a small fraction of the computer’s capacity. NComputing’s virtualization products would enable us to tap this unused capacity of one PC so that multiple users could simultaneously work on the machine. Needless to say, we saved thousands of dollars purchasing a handful of PCs versus thirty.

At Lindsay Park, Dave outfitted the computer lab with twenty-four NComputing virtual desktop solutions and four Energy Star®PCs to create twenty-eight student stations. As a result, the school estimates that it is reducing its carbon emissions by three and a half tons per year, using 5000 kilowatt hours less electricity. Over the eight-year lifecycle of the computer lab, this will result in an e-waste reduction of 363 kilograms.

In addition, the kids at the Lindsay Park School had a great time planting trees, while asking lots of questions about the new lab’s environmental impact, and how the tree plantings offset the lab’s carbon footprint. They were genuinely excited to learn that CO²emissions were being reduced by as much as three and a half tons per year, and electricity use was cut by more than 5000 kilowatt hours per year.

Technically, by installing desktop virtualization software and hardware, the equipment had a life expectancy of eight versus three years. When it’s time to replace, we won’t have to buy twenty-eight new machines, just four. It’s less to landfills, eliminating 85% of waste.

It took just four hours to set up the virtual desktop stations in the computer lab. The old way would have taken us at least two days. And ongoing maintenance is easy because we only have to look after four computers in the lab, instead of twenty-eight.

Traveling out to Edgewater Elementary School is quite an adventure; the school resides on the edge of the Columbia wetlands overlooking a beautiful valley. Unfortunately, big horn sheep and elk love to roam the highway, and the trick is not to hit one of our furry friends.

My goal was to install IT equipment that would be virtually problem-free, thus lessening my need to travel out to the school—saving both gas and elk. The good news is the virtual desktops are very stable. Any changes that need to be made can be done so from a remote console on my desk so it is quick and easy for both the school and me. I could depend on BlueCurl to aid in any difficulties as well.

At the Edgewater School, I took a slightly different approach than Dave did at Lindsay Park. I wanted to virtualize the entire campus save for the principal and a few teachers who were using laptops. As a result, Edgewater Elementary now has one virtualized desktop device in eight classrooms, one in the library and twenty-seven in its computer lab.

BlueCurl and NComputing have always been very supportive and helpful when it comes to these installations. They understand that both Lindsay Park and Edgewater were somewhat test cases for us (since this was our first time installing desktop virtualization products in our school district) and they helped us work through the challenges so that the end result was a good computing experience for teachers and students.

Initially, I did experience a few glitches with the installation at Edgewater because the server was underpowered for the workload requested. But after an upgrade, and once everything was up and running, I am happy to report I have not had to drive out to the school on service calls.

Both Lindsay Park and Edgewater schools have had good experiences with the NComputing virtualization products. We now plan to roll out this approach to other elementary schools in the district, and eventually system-wide.

I do get asked if all schools should be “virtualized.” In many cases, we install virtualized machines as well as more traditional desktops and laptops. It does not have to be an all or nothing proposition; it really does depend on the needs of the school.

However, as desktop virtualization grows in both popularity and capabilities, we do believe this is the future of computing for our school districts.

Troy Rad
Troy Rad is an IT Specialist with Rocky Mountain School District #6 in British Columbia.

Classroom Routines: The Key to a Positive Learning...