The tension in the air was palpable. Every face in the room was animated, busy arguing a point, making more demands for new product features, or challenging the daunting task being presented. Work was being planned, then erased, re-visited, and planned again. The task was clear and there were timelines that had to be met. There was no way to discriminate between the two equally-engaged classes involved except that the Grade 3 students tended to jump around and wiggle a lot when they were excited and the Grade 10 students tended to try to look cool, calm and in control, never betraying their own excitement.

The Grade 10 students were face-to-face with real customers with real demands. Arguably, those little kids wanted “everything,” but isn’t that the reality of a consumer driven product? The Grade 10 students did not yet appreciate the incredible learning experience they were embarking upon. Neither did the Grade 3 students for that matter. Even more critically, neither did either of their teachers.

In the fall of 2010, we participated in the Ottawa High School Technology program led by OCRI, the Ottawa Centre for Regional Innovation, which had announced a challenging project for “first time” Grade 10 programmers. The goal for the program was for the students to create Web-enabled educational games and iPhone apps. The high school students, in teams of two, would partner with a small group of Grade 3 students from a “sister school” and create an educational game in line with the Grade 3 curriculum. The Grade 3 students would become a vital part of the team, being the subject matter experts and ultimately the clients.

Another key part of this project was the industry mentors that came into the class to assist the Grade 10 students with product development and technical assistance. These included Adobe Systems, IBM Canada Software Lab, Macadamian Software, RIM, and The Ottawa Software Cluster. Other sponsors included Algonquin College, Carleton University, University of Ottawa, Ottawa Carleton District School Board, Ottawa Catholic School Board, Ontario Centres for Excellence, and Partnering to Achieve Student Success.

The Grade 10 students were told that the initial goal was to create a Web app and that they would also try to create an iPhone app at the same time, mobile computing being more common to a Grade 10 student than a desktop these days. The customers would be the Grade 3 class. Teachers are often told that learning should be collaborative, in groups, project-based, and focused on real-world outcomes. The problem is that normal classes only have a teacher as “the customer” and all the above “good teaching stuff” is nearly impossible to achieve. By actually having real customers, real due dates, and an independent third party looking at the app (the Apple submission process), everything was changed.

The first thing that everyone (except the Grade 3s) learned was that Grade 3s are very capable of participating in software development and have no issue with being demanding customers. They knew what they wanted and expected the Grade 10s to be able to produce it. Through the process, it became very evident that the Grade 3s were more than capable of coming up with an app idea, the game mechanics, creating an icon and other artwork, defining the game rules, finding bugs, critiquing the user interface, and much more. The Grade 3 students did not see themselves as passive observers in the process. They wanted to be involved and they wanted their ideas integrated into the project. As for actually using the iPod touch or iPhone? They were fearless: it seemed to work exactly how they assumed it would work, just point and slide!

Most learning that happens in schools is compartmentalized, portioned out, and never referred to again. It took literally months to complete the project and this afforded us time to work through the process. Simple things like a button took a week to create. There was debate and discussion over its size, what it should look like, and how it should act when you touch it. This would never happen in a normal assignment that is due one week after it is handed out. Motivating both classes was never a challenge because they knew they had face-to-face meetings scheduled where they had to present their deliverables. No one in either grade wanted to disappoint the other. The pressure was intense yet positive and constructive. When the two classes were brought together, they had to work efficiently and they had to achieve their goals for the day. But it was a team effort and this became more poignant as the project evolved and time passed. Everyone was biting their knuckles worrying and wondering how it would all work out. Both classes had so much at stake in the final product. 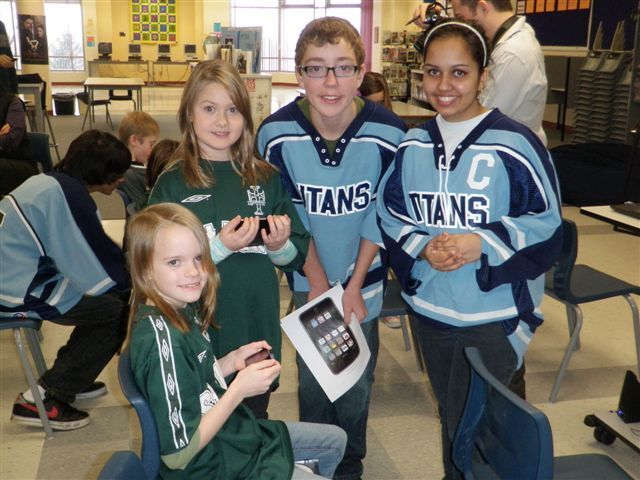 The greatest moment in the project was when the Grade 10 students received the email from Apple that their app had been approved. The success they felt in actually having a program running on a device that almost all of them had in their pocket and use all the time was beyond enormous. Then, sharing the app with the Grade 3 members of their team only made their triumph even sweeter. Finally, at the “app Release Party,” the teams had the chance to share their success with the world. The emotions in the room as the teams, their parents, community leaders, and software developers came together to celebrate were amazing. The Grade 3s saw their plans, their drawings and ideas come alive on the iPod and the Grade 10s made it all work. It was an incredible learning experience for everyone involved.

The impact of this project was huge. The Grade 3 students were not intimidated or in awe of the Grade 10 students at all. In fact, they viewed them as big brothers and sisters. They were not afraid to challenge or disagree with the “big kids.” Listening to the dialogues was one of the highlights for the teachers. The teams learned to communicate well very quickly because they all had a huge stake in the end product. There was a real sense of group responsibility. Everyone was expected to do their share of the work and this was tightly monitored by the group. Girls and boys were on equal footing at each step in the task. In fact, there were many more girls in the Grade 3 class and they took for granted that technology provides as many opportunities and challenges for them as it does for a boy. There is no difference in the ways the boys and girls view themselves; they all see themselves as computer savvy and risk takers with technology. Together, both classes learned that problems can be solved by working collaboratively. They never considered that the teachers were the only ones who could solve them.

A major outcome of this project was that both groups of students learned so much about the hard work, dedication, and incredible learning involved in creating an app. This was a very lengthy project conducted over several months. They had short term and long-term goals. Despite misgivings at many points, the goals were achieved with amazing success. Problems encountered were challenges to be “cracked” open. You cannot beat this learning experience. Perseverance, hard work, teamwork and sheer determination combined for success. This is a life lesson.

As we move forward into the next year, we are looking forward to doing it all again. We have lots of ideas about how we can improve student learning. It would be just wonderful to see this experience expanded to other schools, and that indeed is the intent of OCRI, which has applied for increased funding to roll this program out across the Ottawa Valley, and eventually across Ontario. There is nothing but student success that can come out of a project like this, and our students’ innovative technology products are testament to this success.

How Virtual Computing Helped Save Our Elementary School Computer Labs