A black and white school photograph and a faded handwritten song sheet were all I had to remind me of another lifetime when I sat mesmerized by a young woman who touched my heart and changed my life forever. I was eight years old and she was my grade three teacher.My brother remembers her too, having had her in grade four, but as all ten-year-old boys on the cusp of puberty, he remembers her for being “hot” in her tall, white go-go boots, short skirts and pinned up blond hair. She was Austrian, a gymnast, and to us, she was exotic. I pressed my desk right next to hers and I hung on her every word. I remember her calming voice, the old record player she placed on my desk on Friday afternoons, and the way she smiled at me when I mistakenly called her mom. I remember her hands—long and fine with lightened, uneven spots where the hands of God must surely have touched her.

I was in her class when my mother died. Mrs. Woehrle, just barely a woman herself, came to my aunt’s house with groceries on that day, while I sat alone, feeling lost, scared and embarrassed. Her kindness and comforting words empowered me. I loved her. I wanted to be her. I wanted to make someone feel as special as she made me feel. I wanted to stay with her forever.

I moved to another city and began a new life. She wrote letters for a while, always on paper with a little girl with flowers, sealed in a cheerful yellow envelope. I guess I stopped writing first, and we lost touch. I moved again, to another province, and our ties were severed— or so I thought.

Often over the years, I would dig out my faded song sheet, and as I sang “I’d like to teach the world to sing,” I imagined myself still in her class. Somehow it brought me closer to her, though I couldn’t explain the hold that she still had on me and I had no idea where her life might have taken her.

I visited my brother after the birth of my third son, and he looked down at me and said, “You have Mrs. Woehrle hands!” Somehow I had recently developed the rare skin condition, vitiligo, that we both remembered her having so long ago. I never saw it as an affliction though, but rather a subtle reminder of someone who had inspired me throughout my life even though I had not seen her in almost thirty years. I now had hands painted with God’s same brush as a daily reminder that she was still very much a part of me.

Years went by but I never forgot her. Although I had visited Hamilton a few times over the years, I was never able to find her in the phone book. More years passed, but after some persistence, the help of Google, and perhaps some divine intervention, I found her.

She had become an award-winning principal for her work with inner-city schools. I was able to locate her school, only to find that she was no longer there. Had she retired? Had she died? Had she returned to Europe? I needed to know. I wrote a letter to the new principal of her school and asked that they forward my address to her. I waited, and waited, and bemoaned the inadequacies of the mail service. I began to fear that I would hear from her son with a message that she had, in fact, died.

Five days before my 47th birthday, I heard from my grade three teacher. It had been almost forty years! What followed was a series of emails that helped me understand why, after all of these years, she was still so important to me.

She said she was a bit spooked to get my letter because the day before it arrived, she had told her daughter-in-law about me, and how she had almost adopted three children in her first years of teaching. The timing of this conversation seemed uncanny, and Mrs. Woehrle wondered if perhaps she had picked up “vibes” of my wanting to reach her.

This news came as a great shock as well as a comfort to me as I had not realized the magnitude of her love and compassion. I had no idea that she tried to adopt me and my brothers when it looked like the three of us would be separated. Finally, my aunt had stepped forward to claim us, and my teacher had to watch us go. She was left wondering where we were and could only speculate as to what had happened to the family she had almost adopted. Perhaps on some spiritual level, or through the power of our thoughts, we remained connected and this is why I could never forget her and perhaps why my hands came to resemble hers.

We made plans to meet. I flew back to Hamilton, forty years after I had moved away. I was nervous. I didn’t know what to expect. I was happy with my life, and confident that I had become the person I was supposed to be, but I couldn’t help wonder how easily my life could have taken a different turn. I wondered what she would think of me. Maybe I needed to see her to tell her that I had turned out OK. Maybe it was something we both needed to hear.

As I reached for her doorbell, I felt as vulnerable as I had in grade three, but when she opened the door and wrapped me in a warm hug, I knew that she had longed for this reunion as much as I had. The special bond between us had survived four decades.

Teachers can and do have a tremendous impact on a child, both in and outside of the classroom. Mrs. Woehrle proved that to me. Her kindness during a very difficult time was never forgotten and my desire to emulate her compassion towards children has helped shape me into the person I am today, both as a mother and as a librarian. I am grateful that I had the chance to say thank you.

Sometimes you CAN go back. Sometimes it can help you go forward, and sometimes it is nothing short of a miracle. 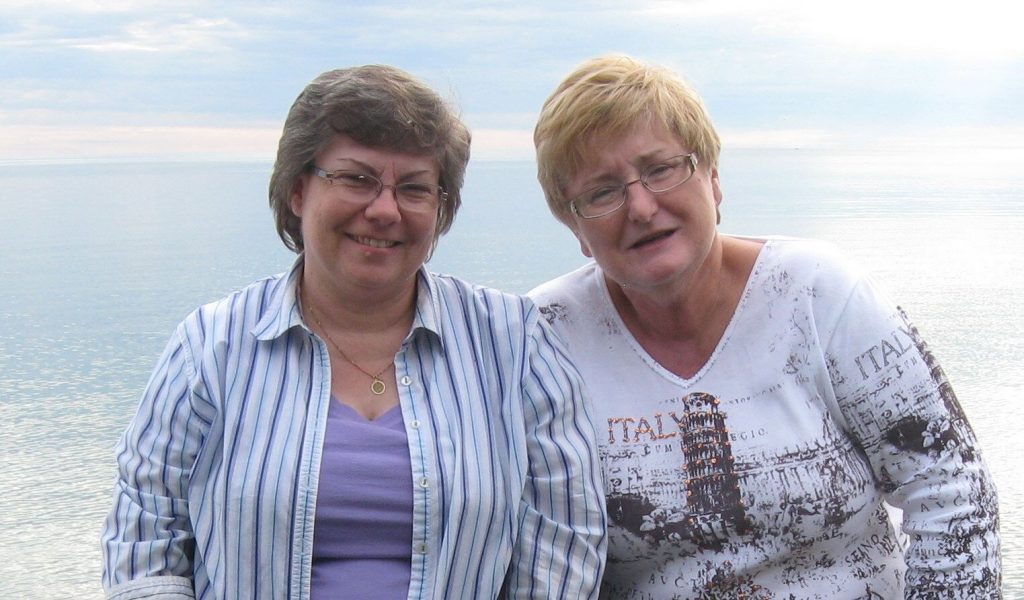 Judy MacLean
Judy MacLean is a librarian at the University of New Brunswick. She holds a Master’s degree in Library and Information Studies from Dalhousie University, and a graduate Certificate in Family Literacy from Penn State University. She lives in Fredericton, New Brunswick with her husband and three teenage sons.

The Secret of the Stone Circle

Names Will Never Hurt Me: Bully Proofing for...