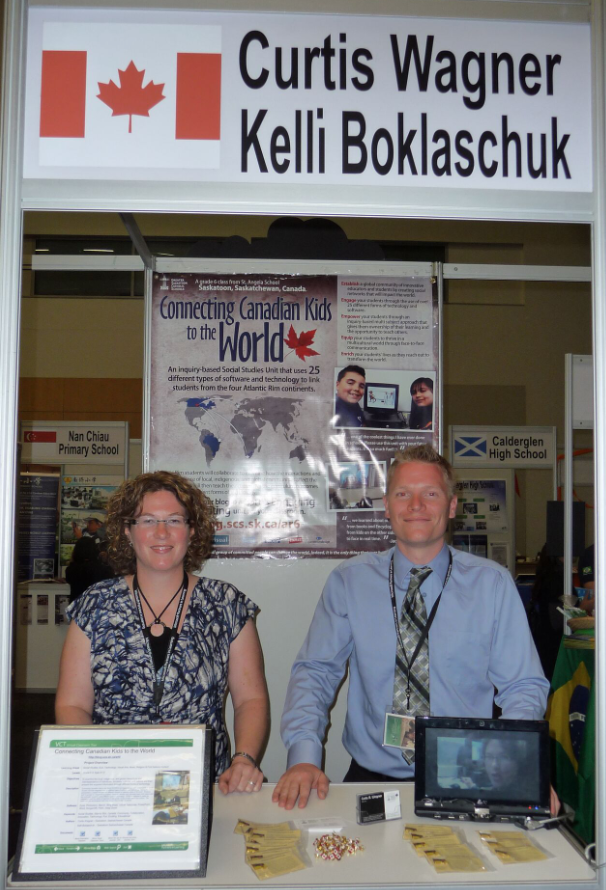 Being selected as a finalist in Canada led them to compete at the Global Microsoft Innovative Educator Forum in Cape Town, South Africa where the project was judged against 125 projects from 114 countries. Connecting Canadian Kids to the World was among 12 finalists chosen in the collaborative projects category—a significant accomplishment given that 200,000 projects overall were entered in the original competition. This was the first time in the history of the forum that Canadian educators made it to the semi-finals.

A key part of Wagner’s and Boklaschuk’s unit saw Wagner’s class create a partnership among schools of the four Atlantic Rim continents to learn about each others’ cultures. The students communicated via email, online chats and video conferences with schools in Brazil, South Africa and the United Kingdom. When it came time to show what they’d learned, the Canadian students presented to their classmates using their choice of more than 25 different types of software and technology.

“We are still meeting the curriculum outcomes for Grade 6 social studies, we’re just doing it in a different way,” said Wagner. “It went over particularly well for the kids who are usually more challenging to engage. It was great to see them take ownership of the project and become so excited about their learning.”

Boklaschuk said the online connection between the classrooms was a highlight. “Thanks to the technology, it’s like the students were in the same room together. Learning from each other this way was a new experience for them, and now they have a continuing relationship.”

Student reviews were also positive. “I really enjoyed this unit because we got to learn not only from the Internet and books but from a new friend we made. It was really cool to learn about how the countries are the same and how they are different,” said one student.

Wagner and Boklaschuck hope the recognition the project has received will encourage more teachers to investigate how to incorporate technology into their lessons. Everything teachers need to use Connecting Canadian Kids to the World in their own classrooms is available for free online at blog.scs.sk.ca/ar6.

This article is from Canadian Teacher Magazine’s Jan/Feb 2011 issue.

God Save the Queen