I want my students to wake up and say, “Cool, I have Mr. Fiorillo’s class today.”

There is no obstacle you cannot overcome according to secondary education student Mike Fiorillo.

Fiorillo recently transferred to the U of A Faculty of Education from Grant MacEwan University where he played for the MacEwan Griffins hockey team while completing his pre-professional year of education. 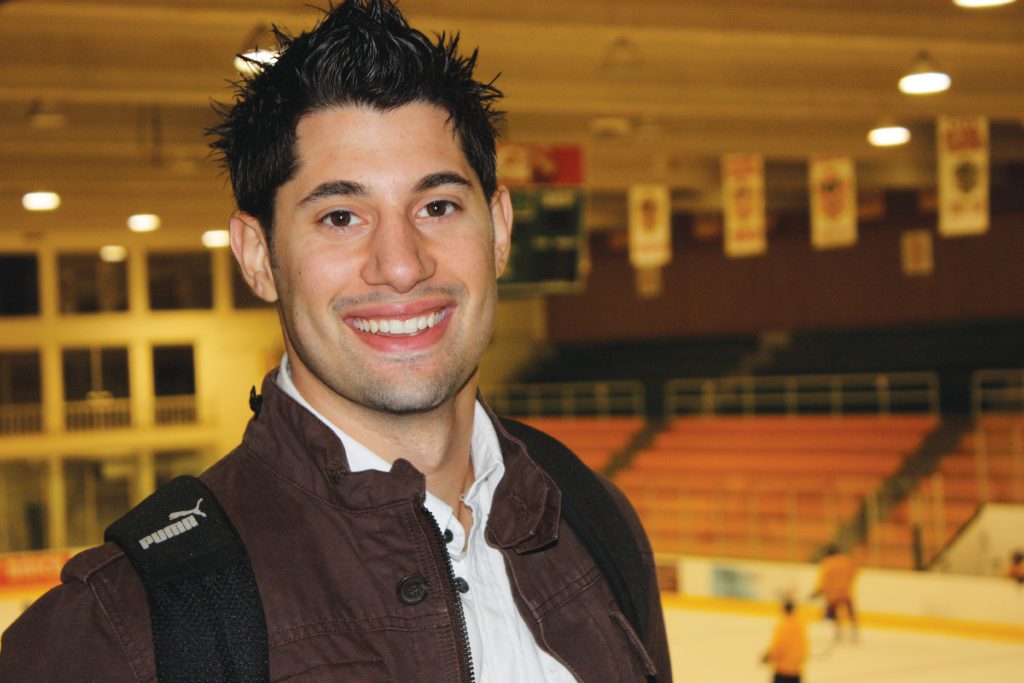 Fiorillo admits he has probably worn skates more than shoes. His game accolades include playing for the Fort Saskatchewan Traders of the AJHL where he was a two time all-star including being the north all-star team captain of the 2007 All-Star Game. He played NCAA hockey at Michigan’s Adrian College where he was a two-time Midwest Collegiate All-Academic team member. And In 2009-2010 while with the MacEwan Griffins, he received the Top Scorer Award and was designated MVP.

Yet Fiorillo says his experience with the game of hockey and specifically those he met along the way make for a natural segue into the profession of teaching. “I had some great coaches like Lee Fogolin. He instilled a lot of things in me about respect, leadership, discipline, how to present yourself personally and professionally. If you ever run into a hockey player more often than not he or she is a person very well mannered who knows how to carry himself. It’s the off-ice things that are as life-defining as the time spent on the ice,” says Fiorillo who talks about a life altering moment during these early years when he lost a good friend.

“Lee’s son Michael Fogolin was my really close friend. When he died suddenly at age 17, I learned about the heartache of a friend passing. Lee and his family put a big stamp on my life.”

Born in Edmonton, Fiorillo grew up with a love of the game inspired by his upbringing and by his brother Umberto Fiorillo (’04 BEd) who is a teacher and the director of St. Edmund’s Hockey Academy in Edmonton.

“Hockey was a natural thing for me. I grew up the youngest of three siblings, and my brother was already playing by the time I put on my first pair of skates at two and half. I was on my first Thom Thumb team at age five,” he recalls.

“I’ve been fortunate to work as an instructor with the students in my brother’s academy. I was helping kids both on the ice and in the classroom. Knowing I was good with them has had a real impact on me. If I can do teaching and coaching and hockey combined, that just brings all of this together.”

Fiorillo says his years on and off the ice have helped him prepare to face adversity however unexpected, such as a recent change in plans for his hockey career when he was released after being invited to join the University of Alberta’s Golden Bears Hockey Team.

“I had the pleasure of skating with them and being a part of their team for a month this summer. What an excellent group of guys. What a great thrill. The time I got to share with the players and coaching staff is something I’ll remember for as long as I live.

I’ve played for three different universities around North America and then to throw on a Golden Bears’ jersey for two games and to score a goal, well that’s just great to have behind me.”

He recalls the moment he first considered becoming an educator when his elementary school teacher surprised him one night during one of his hockey games.

“I remember when I was in grade three and told my teacher Mr. Brooks that I had a hockey game that weekend. He was very involved and very interested in everything that I was doing with athletics. I remember talking to him about a big hockey game I had in Fort Saskatchewan where he lived. I was on the ice and when I looked up, there he was,” says Fiorillo.

“I remember thinking, ‘wow my teacher actually came out to watch me play!’”

Raymond Brooks (’91 BEd, ’89 BA), who is presently teaching at Blessed Kateri Catholic Elementary School in Edmonton, says he remembers Fiorillo well even though it’s been close to two decades since they were in the same classroom.

“I can still picture Michael and also his mother who was always involved in the school. He was on my cross-country running team and was one of our top runners. He was very good in all sports, but what really stands out is his character. He was very respectful and he had everyone’s respect in return. He was destined for success,” says Brooks.

In addition to his studies, Fiorillo is now playing hockey with a senior AAA team and coaching bantam hockey. He says he’s ready for the next steps in his career.

“Hockey has been such a big part of my life that I know it’s time to give back. I know I can share my lessons with adolescents who are in the midst of facing their own barriers.”

“Everything I’ve done is about overcoming obstacles. I want to bring a sense of fun into a classroom, and I want my students to know that they don’t have to listen to those who say it cannot be done. I don’t want them to wake up and not want to go to school.

I want them to get up in the morning and say, “Cool, I have Mr. Fiorillo’s class today.”

Dawn Ford
Dawn Ford is the Director of Communications at the University of Alberta, Faculty of Education. www.education.ualberta.ca

This article is from Canadian Teacher Magazine’s Nov. 2010 issue.

Jungle School: Lessons We Can Learn from Orangutans