After I retired from my career as a teacher in the public school system in Nova Scotia, I decided to find something worthwhile to ease my transition into retirement. So in February of 2008, I went to Havana as part of a group of volunteers to work with students studying English. The volunteers had the opportunity to divide their time between two locations: La Casa del Nino y la Nina (an after school program for elementary students) and FLEX (Facultad de Lengua Extranjeros—the language school of the University of Havana). 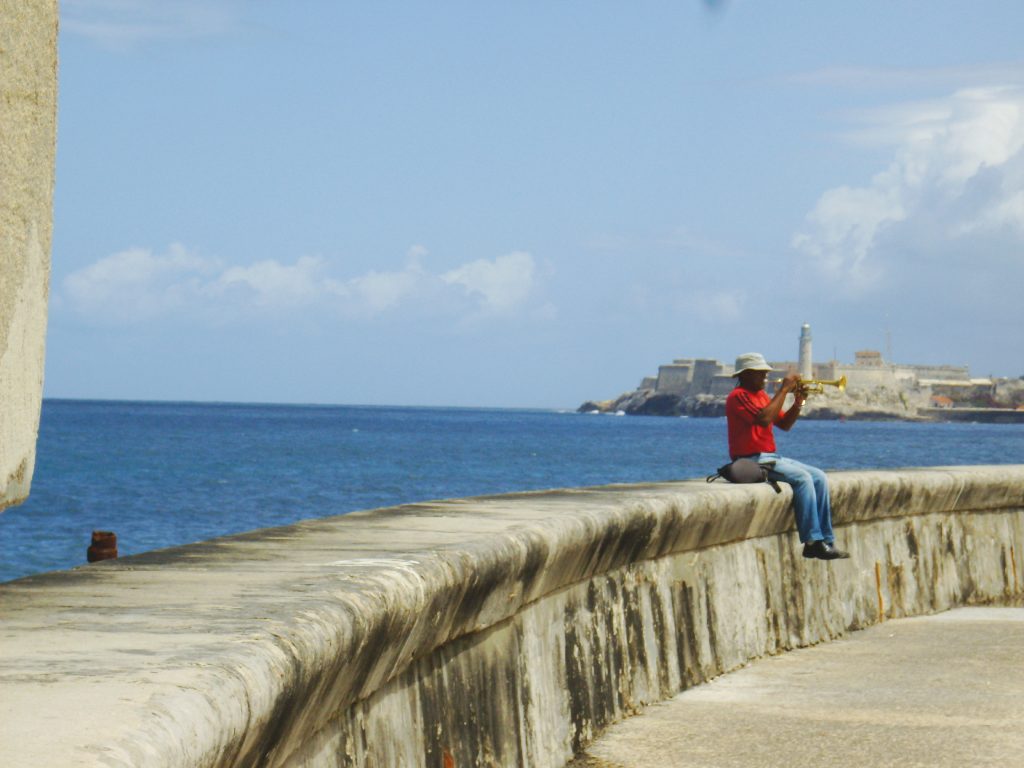 A musician sitting on the seawall at the Malecon, Havana.

I chose to spend the vast majority of my volunteering time working with students at FLEX in the first year of their language program. As one might imagine, I was a bit nervous when I first entered a classroom in the FLEX building. What I found was a group of students who were universally enthusiastic in their outlook and eager to do anything asked of them to help them improve their English language skills. The students were extremely interested in everything about Canada and were very open about sharing their thoughts—both pro and con—on the Cuban method of doing things.

While I was in Havana, a significant historical event occurred—Fidel Castro stepped down as leader and handed the reins of power to his brother Raoul. This made for many interesting and, at least for me, enlightening discussions in the classroom with the students— a true teachable moment of which I took full advantage. 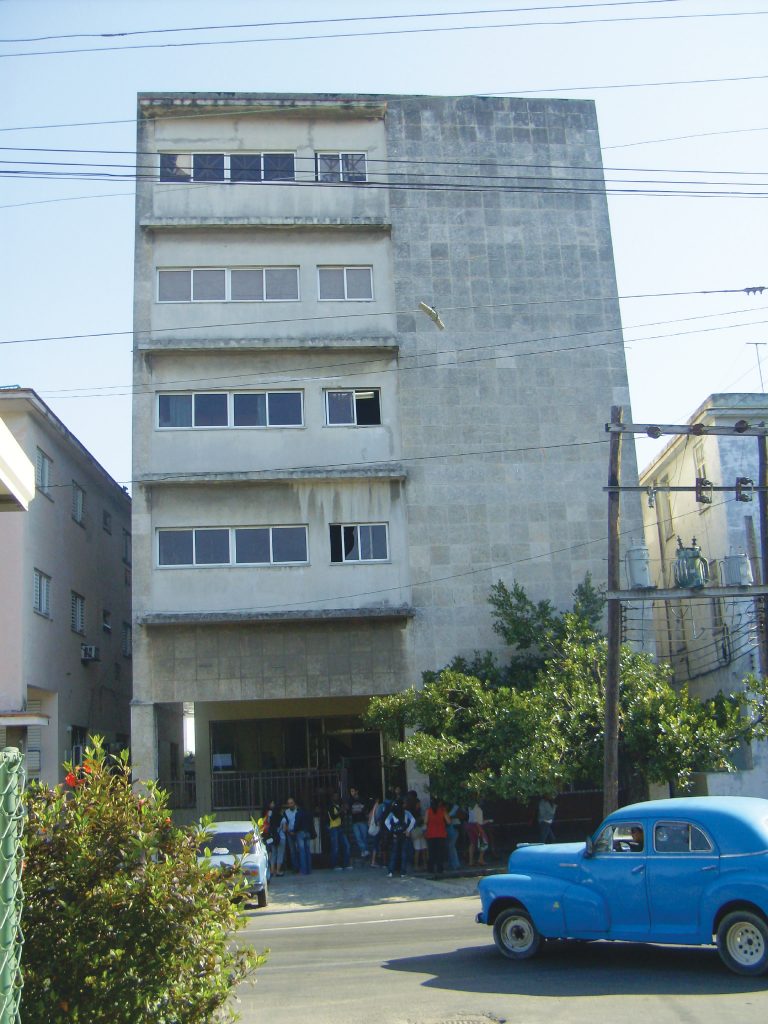 Many things impressed me during my first year volunteering in Havana: the enthusiasm of the students, their eagerness to improve their English language skills, the dedication of the teachers, the mutual respect and affection between the teachers and students to name but a few. It did not take me long, however, to pinpoint a few areas where improvements could be made.

Two, in particular, stand out: although the students at FLEX all had a good grasp of English and could carry on a conversation, it soon became evident that they had learned English from teachers whose first language was Spanish, as their pronunciation of English words was heavily influenced by Spanish and needed to be worked on. Also, they had no background in common English idioms. As an example I would often use “six of one, half a dozen of another.” This was just confusing to the students and I realized that this was an area in which I could help.

Another feature which must be mentioned was the utter lack of supplies and tools with which everyone works. The teachers carry what we came to call “Havana Briefcases”—basically a Canadian plastic grocery bag in which they keep a few pieces of chalk, a pen or two, a blackboard eraser and, if they are lucky, some paper. The students on their part have almost exclusively supplies donated by Canadians—Hilroy notebooks and Bic pens. 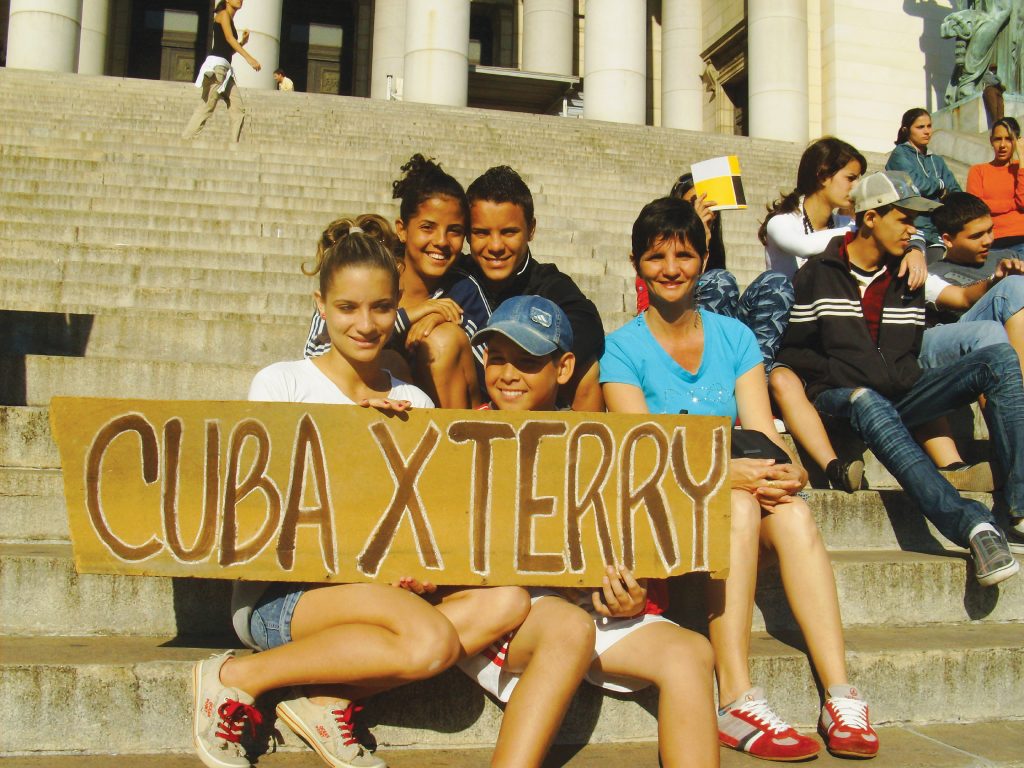 A Cuban family at the Terry Fox Run in Havana.

After returning to Halifax, I decided to develop my own volunteer program at FLEX and, to that end, formed Compay Education Tours. It took the better part of a year to get all the details in place and obtain all the proper authorization from the Cuban authorities. Cuban bureaucracy is slow at the best of times, but with the help of a Canadian living in Havana with whom I contracted to represent me, the T’s were crossed, the I’s were eventually dotted, and the program was set.

Using 2009 as a learning experience, I was able to fine-tune many aspects of the program and redesign it for a return in March 2010. In addition to the volunteering element, the program also includes an orientation tour of Havana organized by Amistur, the tour agency arm of ICAP—the Instituto Cubano de Amistad con los Pueblos (the Cuban Institute of Friendship with the Peoples), the organization in Havana with whom I work.

Included in the orientation is a private guided tour of Havana giving the volunteers an overview of the city that will be their home for the duration of the program. It includes visits to the main tourist sites and an elementary school, a lunch with a representative of ICAP to discuss what life is like in Cuba, and the opportunity to attend a meeting of a local Committee for the Defense of the Revolution, a sort of local community council found in every neighbourhood in Cuba which meets regularly to discuss matters of local concerns.

We attend a reception at the Canadian Embassy, watch a Sunday afternoon neighbourhood Rhumba demonstration celebrating the Santaria religion and, most moving of all, participate in the annual Havana Terry Fox Run, which in 2010 was hosted by the family of Terry Fox who attended to acknowledge the tremendous support that Cubans have shown the Marathon of Hope over the years. It is important to note that Cuba, with its limited resources has raised more money for cancer research per capita than almost any country other than Canada; this is all the more significant when you realize that the average monthly salary for a Cuban is about $25 Cdn per month.

For more information, please contact Philip Theriault at phil@staff.ednet.ns.ca or visit us on Facebook. Search for Compay Education Tours.

Philip Theriault
After retiring from 32 years as a teacher in the public schools of Nova Scotia, Philip accepted a contract to be Volunteer Manager for JazzEast, one of the major arts organizations in Eastern Canada. In 2008, Philip volunteered for the first time at the Facultad de Lenguas Extranjeras (FLEX) in Havana and, in 2009 and 2010, he organized his own group of volunteers who spent time in March and April volunteering in the English Department at Flex. He is now finalizing details for the 2011 program.

This article is from Canadian Teacher Magazine’s November 2010 issue.