Strong winds and cold greeted Dwayne Donald and his students as they climbed to the top of the hill at Ribstones, an Aboriginal heritage site located outside of Viking, Alberta. Coloured ribbon, braids and offerings of tobacco surrounded the area, and despite a white metal fence, there was a strong sense that this is a sacred place. 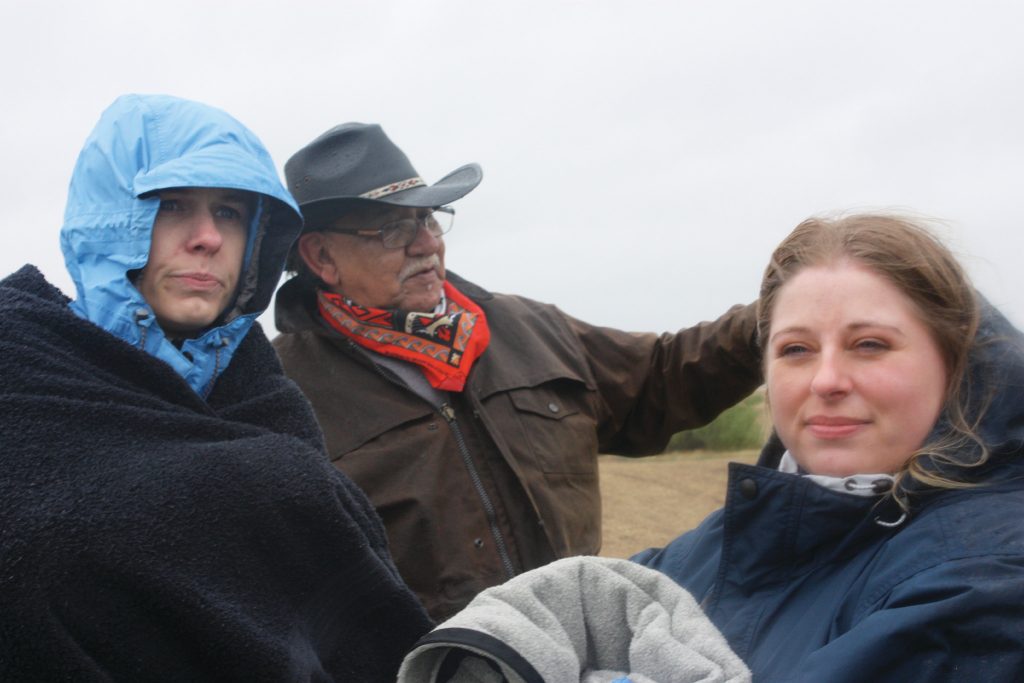 U of A education students Michelle Lajeunesse (left) and Jolyne Young with Elder Louis Raine.

The students went to Ribstones as part of a course designed and led this spring by education professor Dwayne Donald. Intended to help pre-service teachers to understand and interpret the significance of Aboriginal perspectives, the course is one of a host of unique experiences being offered to students at the University of Alberta’s Faculty of Education.

“One of the unifying messages of this course is that Aboriginal curriculum perspectives provide a unique opportunity for teachers to rethink and reframe their approaches to teaching and curriculum,” says Donald.

According to the teacher and researcher, shifting public policy priorities in Canada are calling for deepened awareness of including Aboriginal perspectives into the teaching curriculum. Although the intentions are no doubt good, Donald is concerned that some recent school board activities are aimed at fast-tracking Aboriginal perspectives into their curriculum.

“Some elders I know talk about all of the things that have happened to them since treaty 6 and 7 as our ‘dark ages.’ This era is still very recent and Aboriginal people are still recovering,” says Donald. “The idea of repatriation is really strong; language and ceremony are being repatriated. We need to be very awake for this, and we need time for this.”

As Donald’s students climbed the hill leading up to the Ribstones, they were greeted by Elder Louis Raine and his family from the Louis Bull Tribe. Louis tells them that Native people have visited Ribstones for hundreds of years to make offerings to Old Man Buffalo whose spirit is said to reside in the two remaining ribstones on the hill. He explains that the marks on the stones are from an era when the buffalo were plentiful.

“There were three ribstones at one time, the Bull, the Cow and the Calf, but now there are only two,” says Louis who explains that newcomers still visit the site yet many do not understand the significance of the stones. As a result, the site has been vandalized several times over the years.

According to Donald, the rocks represent what is left of a large interconnected network of buffalo stones that dotted the landscape a short time ago and that archaeologists termed the “Ribstone Complex.”

“According to Solomon Bluehen, an Elder from the Little Pine First Nation in Saskatchewan, these Ribstones are the dwelling places of the guardian spirits of the buffalo. They are considered life-giving and life-sustaining sites of sacred renewal,” says Donald.

A recent recipient of three dissertation awards for his doctoral thesis The Pedagogy of the Fort: Curriculum, Aboriginal-Canadian Relations, and Indigenous Métissage, Donald argues in his dissertation that dated teaching curriculum continues to reinforce unhealthy relations between people.

He argues that teaching curriculum throughout history has been informed by what he calls “colonial frontier logics” and has been taught in Canada for many generations. “It severely circumscribes the ways in which the relationships connecting Aboriginal peoples and Canadians are conceptualized,” says Donald.

Rather than repeat persisting logics that continue to divide people, he urges the field to consider more critical articulations of Indigenous curriculum and teaching methods. “We must honour the ethical imperative of human relationality.”

The researcher brings these principles and his own critical examination of the field to his class where he imbues the philosophies and wisdom traditions of Indigenous knowledge systems and the educational implications of these.

“My hopes for my students are that some shifts have happened for them in their thinking and that they may experience personal and professional insights that help position them more ethically in terms of Aboriginal perspectives.”

Karyn Robertson, who is one year away from finishing her BEd in secondary music education, says the class was like nothing she had ever experienced before.

“It makes sense to talk about the balance between the mental, emotional, physical and the spiritual in an Aboriginal perspectives setting, but I never realized that we were talking about my spirit as well.”

“One of the biggest things I’ll keep with me from Dr. Donald and from this class is the reminder that acknowledgement of the spirit isn’t just for the religious or those of Aboriginal descent, it’s for everyone.” she says. “Denying your students’ and your own spirits’ existence in everything you do denies who you are, and who they are.”

It’s unlikely that Donald’s students will forget walking through the woods or the hours of detail they put into their creative final projects which include an original music composition, wood carvings and symbolic hide etchings. Some will tell their own students about the trip to Ribstones. And maybe they will get an opportunity to return to the sacred site.

But what is most significant is that the movement towards bridging divides in teaching pedagogy and curriculum has begun. Aspiring teachers are learning fresh approaches to teaching that will repair Aboriginal-Canadian relations that seek to understand more deeply and ethically how our different histories and experiences position us in relation to each other. And the movement is happening now.

As Donald and his students were climbing the hill to Ribstones, deans of education across the country were preparing to launch their unique pan-Canadian Indigenous Education Accord at the annual Canadian Society for the Study of Education’s (CSSE) conference at Concordia University in Montreal.

Unprecedented in Canadian history, the recent accord on Indigenous education which calls for a “concerted and cooperative effort to transform education by rejecting the ‘status quo’” is the framework for this movement.

“It was an absolutely electric gathering that is setting the stage to make a real difference based on the deep commitment of Aboriginal and non-Aboriginal attendees and beyond,” says U of A education dean Fern Snart who was the president of the Association of Canadian Deans of Education at the time of the 2010 Accord launch.

According to Donald who intends to continue offering students his course on Aboriginal curriculum perspectives and inspiring new styles of teaching that honour Canada’s unique and muti-cultural makeup, the Accord is timely and signifies positives changes ahead for Canada.

“Canada is a fusion of traditions. If we are going to decolonize the relationship it will take time and patience. But we will all benefit,” says Donald. “Canadians will be different. They will be stronger and better prepared to help future generations.”

To view a video of the Accord visit the Association for Canadian Deans of Education webpage on the CSSE site at http://www.csse.ca/ACDE/

Dawn Ford
Dawn Ford is the Director of Communications at the University of Alberta Faculty of Education. www.education.ualberta.ca

How Virtual Computing Helped Save Our Elementary School...

What Is It About Teaching School That You...