The Extra Mile: A Mini Bio of Colin Fewer

A true desire to improve the lives of children is the reason I became a teacher. Although I still love being a classroom teacher after twenty-four years, there are times throughout the year when enthusiasm wanes. Occasionally, I find myself bogged down by the litany of paperwork that is a regular part of being a teacher. Many days are a flurry of activity as I strive to prepare students for exams, crt’s and the like. Late papers from desperate students, intent on earning a few more marks litter my desk. At these times, I dig deep to find inspiration to give me the energy to carry on. 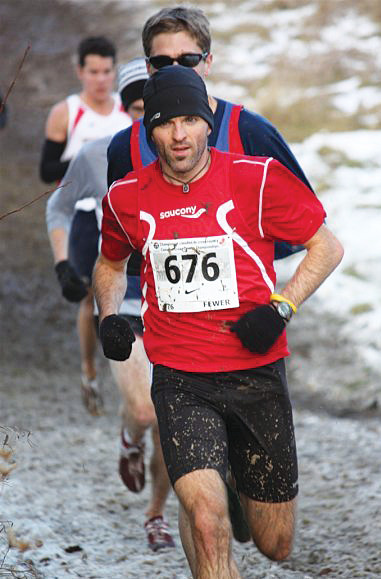 I found that inspiration in our school. Mr. Colin Fewer, our physical education teacher, has inspired me to re-commit myself to both the professional and personal goals I set at the beginning of my career. Mr. Fewer has just returned from two races in British Columbia. In his first race he placed 10th out of approximately 14,000 national and international competitors in Victoria’s Times Columnist 10 km race; Mr. Fewer ran a 30.43 minute race with a six-second personal best. The second race, also an international field was the Bank of Montreal half marathon in Vancouver where he placed sixth overall in a time of 67 minutes and 55 seconds.

Mr. Fewer has a track record that reflects the spirit of a champion. He has twice represented Canada in both the 2008 World Cross Country Competition in Edinburgh, Scotland and the North American Central American and Caribbean Cross Country Championship, Florida, USA in 2007.

As well, Colin has represented Newfoundland on several occasions in races from 5 km to 21.1km across Canada. He has won the last five consecutive Tely 10 Mile Road Races in St. John’s, NL.

This level of competition requires a commitment to a strict regimen of training. I have watched closely as he trained intensely for these races. Mr. Fewer runs seven days a week, accumulating between 60 and 90 miles. His week includes one long run of approximately 15 miles and two high-intensity speed sessions. His dedication to daily training includes a healthy and nutritious diet, a demanding time commitment and taking leave without pay in order to compete. Why?

He does this for his own personal growth and to maintain a high set of standards he has set for himself. Mr. Fewer thrives on the constant state of self-improvement and enjoys pushing himself to a limit that most people cannot even imagine. His passion for running started as a grade nine student, but he has only become a serious runner in the last five years. He has made many sacrifices to maintain this level of running but believes it is worth it. It is one of the top three priorities in his life, trumped only by family and teaching.

Mr. Fewer has managed to find a healthy balance in his life. He takes pride that he is a living example of what he preaches every day to his students—that health and wellness are an important part of life.

I do not know that there could be better role modeling for students. They listen intently as he regales them with stories of the road, stories of beautiful places and stories of great friendships. He impresses upon them the importance of challenging yourself and the strength one builds from meeting those challenges. Mr. Fewer states, “Dreams are not wishes. Dreams don’t come true because you want them to. Dreams are a passion that come from deep inside you, a goal that you commit yourself to and strive and work hard for. It’s believing in yourself.”

Mr. Fewer has inspired me to challenge myself. I will dig my sleepy joggers out of the closet, blow off the dust and try them on for size. I might just make it around the lake. I have renewed strength, thanks to Mr. Fewer.

Will Mr. Fewer vie for the Olympics? Stay tuned, you never know.