Imagine yourself on a ferryboat car deck with an espresso in one hand, your overnight bag stowed in your trunk, and a dazzling skyline filling the horizon behind you. While the boat churns across the quiet ocean, the land disappears from view and a shoreline materializes in the distance. 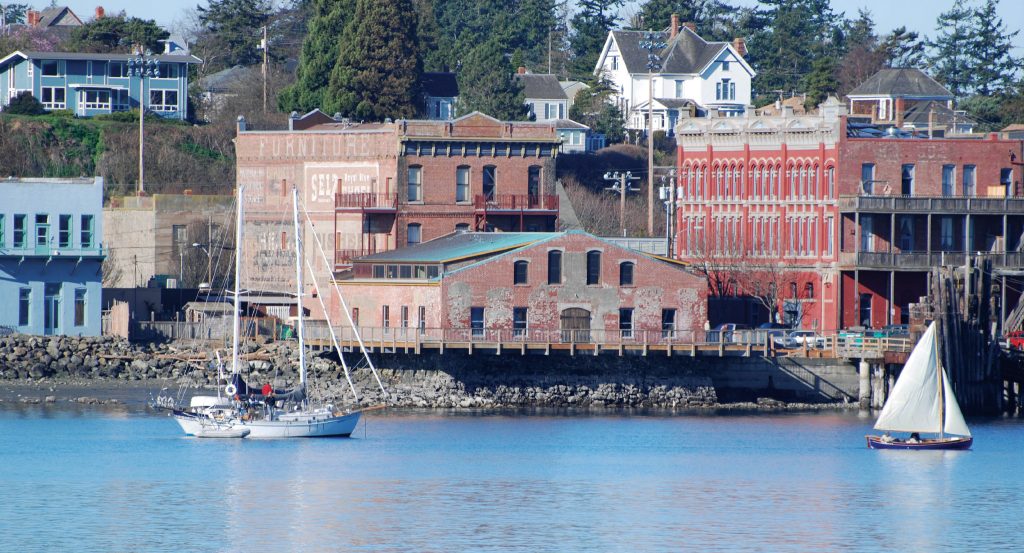 You’re bound for a getaway to Port Townsend on the US Olympic Peninsula, a nationally recognized historic district with famous red brick and stone buildings—a large dose of the best medicine after the hustle and stress of teaching for ten months.

With the Olympic Mountains as backdrop and the doorway to Puget Sound opened wide, Port Townsend is beautifully situated on the northeastern corner of the Olympic Peninsula, midway between Seattle and the San Juan Islands. Just a four hour trip from Vancouver, BC, this historical destination, where the streets are lined with buildings and homes lovingly restored to their 1800s origins, offers a dizzying assortment of attractions and activities, fulfilling nearly all sensory, culinary and recreation needs for your getaway.

Port Townsend is an architectural marvel that remained in a time freeze of sorts for nearly 100 years before being rediscovered and renovated. In the 1800s, a thriving city bent on becoming the largest port in the world erected a large group of ornate buildings and Victorian homes. By 1857, the waterfront was one of the busiest and wildest on the West Coast. Besides countless chandleries that catered to the needs of seafaring captains, the port boasted twenty-one saloons and many less than reputable brothels.

The dream bubble burst when a planned railway line experienced a financial reversal and never reached Port Townsend’s shores, and the developing Seattle, Tacoma and Olympia became competing port cities. The Great Depression added insult to injury, and the grand buildings were only saved from a wrecking ball by lack of funds to hire one.

In the 1970s people slowly began to discover this diamond in the rough that was quietly waiting on the peninsula at deflated real estate prices. In 1976, the downtown waterfront and the residential area on the hill, referred to by locals as “uptown,” were designated a National Historic District. In the 1990s, the homes and Victorian buildings were restored to their former grandeur, setting the stage for Port Townsend to become a popular tourist destination.

The town now boasts one of the largest collections of well-preserved Victorians in the United States, along with an equally impressive group of ornate office buildings in a Romanesque style. It is one of three seaports along the coastline of the US named to the National Register of Historic Places and stands today as evidence of another era.

My favourite building in Port Townsend is the Jefferson County Courthouse. Called by many “the jewel of Port Townsend’s Victorian architecture,” this neo-Romanesque building was designed in 1892 by Seattle architect Willis A. Ritchie, who ordered bricks from St. Louis, rather than use the soft ones found locally. The building’s 30 metre clock tower, its clockwork dating to 1892, has long been a landmark for sailors. The bell and the clock mechanism were built of solid brass in 1891. On the north and east faces of the 2.75 metre clock, the original cedar hands still mark time. The south and west hands unfortunately had to be replaced after 62 years of use. When electricity to the building was made possible in 1912, the chore of winding the huge clock, which previously required two men half a day to wind by hand was much reduced. The task demanded a climb up 154 steps from the basement to the tower. With the use of an elevator installed in the 1970s and an electric winch, the process of winding now takes about fifteen minutes. The clock operates much like a cuckoo-clock and during my visit I woke up each morning to the peaceful chime of the bell echoing over the water with five rings to mark 5:00 a.m. Don’t worry, I’m a light sleeper, my husband didn’t hear a thing.

Many of the mansions of former times have been converted into bed and breakfast inns that have become “must-stay” locations for visitors seeking the true Port Townsend experience.

We stayed in an all-suite waterfront hotel, The Clam Cannery, located in an old brick cannery built in 1885 that sits out over the ocean, with views of the Cascade and Olympic Mountains, Whidbey Island and the Strait of Juan de Fuca from every suite. It is at the heart of the downtown area on Quincy Street, within walking distance of everything—dozens of art galleries, coffee shops, clothing boutiques, restaurants, theatres and pubs.

After four decades of abandonment, several million dollars and seven years of loving restorative work by the Kevin Harris family, this new hotel opened in August 2009. When we first drove up and saw the old brick building, we were wary, but the inside of the hotel is a unique work of art, carefully restored with every attempt to reuse original building materials as well as the craftsmanship of contemporary local artisans. Each room is exquisitely appointed with subtle touches of handcrafted works. The mirrors are hand-etched, all the metal, from the shelving brackets to the handrails to the electrical cover plate at the end of the bar counter, are custom crafted by a local blacksmith. Clamshells from under the building have been incorporated into the concrete countertops of the gourmet kitchens, old worm scarred reclaimed wood from the walls now adorn the cabinet door faces, and timbers from the cannery floor have been forged together to form large entry doors hung by iron hinges. The character of the hotel has been accented with extensive use of hammered copper, concrete floors and hand-blown glass fixtures. No longer wary, we were now charmed! 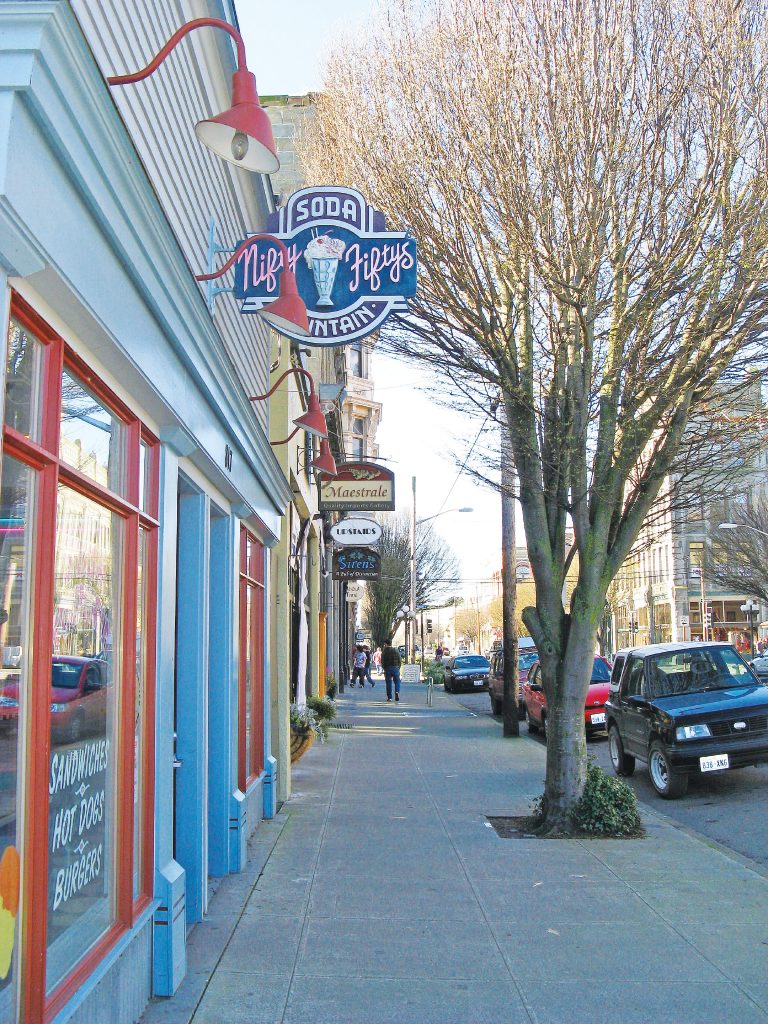 The hub of activity is on Water Street and the downtown shopping district. Although Port Townsend isn’t large, you’ll need a car, taxi or bike to reach many areas. The town is home to a large delegation of artists, writers and craftspeople and has over 100 shops, galleries and restaurants.

Port Townsend’s personality starts with the historic City Hall, which is on Water Street. City Hall is in a brick building that once housed the town’s fire station; part of the structure continues as the centre of local government, but the fire station has been converted to the three-story headquarters and museum of the Jefferson County Historic Society. It’s definitely worth exploring.

Further south on the main drag are a wide variety of shops and restaurants. It’s possible to start your day with breakfast uptown at Sweet Laurette’s Café and Patisserie, where your food is prepared from scratch and the pastries and espresso are delicious. Perhaps you might enjoy a midday repast of Mexican food at El Sarape or lunch with a view at the Belmont built in 1885 and the only remaining waterfront restaurant and saloon from the 1880s. In those days, many a man tipped one too many pints of brew down their throat, didn’t keep their wits about them and found themselves new sailors when they woke up the next morning on a ship sailing out to sea. Later, sample the ice cream at the Nifty 50 Soda Fountain or Elevated Ice Cream where local dairy farms supply the cream, and truffles are made from scratch on site. One of the best fresh seafood restaurants is Fins Coastal Cuisine, a waterfront eatery with many windows and an outdoor deck overlooking the water on the Pier at Union Wharf.

Shops on Water Street include W. James Books, a perfect spot to pick up the latest bestselling novel or find a book that has long been out of print, and a Native American art gallery stocked with an excellent collection of handcrafted artworks.

Siren, with an outdoor deck perched three stories above the water, is a popular pub to quench your thirst with a pint of Guinness, live entertainment and some good food, or go to the Waterstreet Brewery for on-site brews and more live music. Maybe after a great meal and a walk along the streets of the town, finish the evening with a show at the Rose Theatre. The culture of Port Townsend brings people from all over the world to enjoy the Blues and Jazz Festivals as well as the Wooden Boat Show in September.

Port Townsend is proud of its waterfront connection and it shows in the number of seaside parks, docks and walkways next to the water. Spend some time discovering the island’s beauty in pristine woods, state parks and waterfront.

It’s a two-mile hike, a five-minute car ride or a short bus trip from the downtown area to Worden State Park. What started out as an army post is now a well preserved, 433 acre park and multiple use facility that draws 1.6 million visitors a year. Scenes from the film An Officer and a Gentleman were filmed on these park grounds. This facility offers conference facilities, performing arts venues, interpretive programs and vacation housing. Once at the fort there are the expansive grounds to explore plus the miles of beach that lead to the Port Townsend Science Centre and a Natural History Museum Exhibit. At the end of the beach is a now automated lighthouse that was originally built in 1879.

Before you visit, you’ll want to check out Port Townsend’s web site (www.ptguide.com) to find the lists of festivals, art and cultural events and other local happenings. 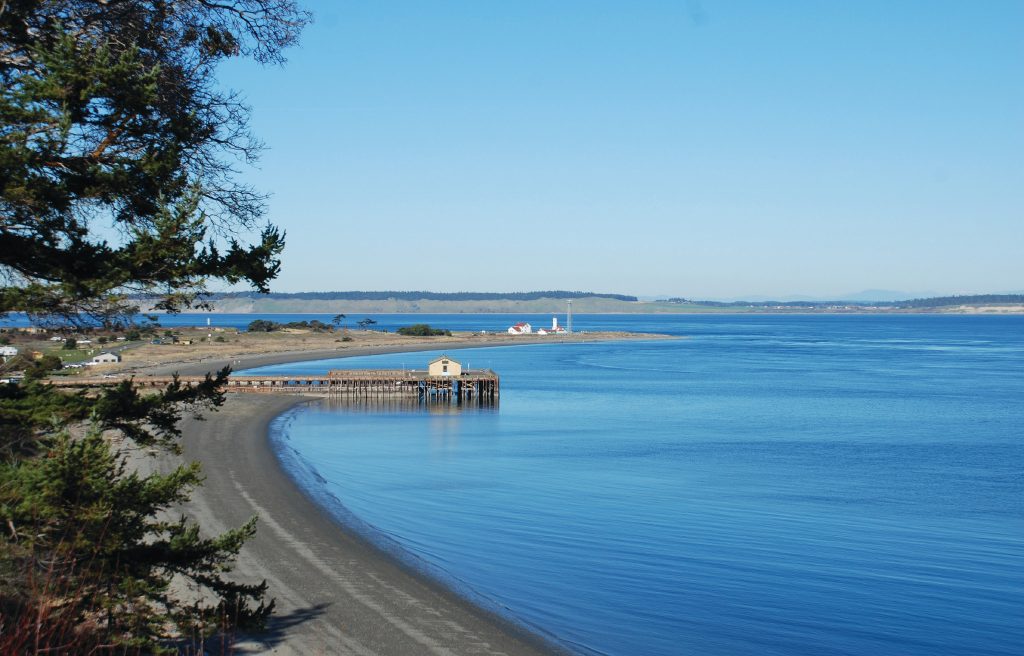 When you arrive, start by going into the visitor centre, located in Haines Place Park-and-Ride, 40 12th Street (1-360-385-2722). There are guided walking tours of the historic buildings, or if you prefer a self-guided tour you can also pick up a brochure with a map of the town and its historic buildings. The Port Townsend Menu Guide will point you to the right places to eat depending on your fancy and your pocketbook.

Seeing everything this unique place has to offer requires walking the streets and exploring with no time commitments. It will take several days to experience the atmosphere of local sidewalk cafes, art galleries, restaurants, pubs and shops where art and history come together. It would take too many pages of this magazine to tell you all the hidden charm and entertainment found in this small town. I loved it and will go back again to see more of what I know I missed.

Mindful Schools/Mindful Communities: Participating in the Promise of...

Five Lessons on Sexting: The Naked Truth about...