October 5th marked World Teachers’ Day, and although the Prime Minister in office normally takes note of this day, the right honourable Stephen Harper went above and beyond this year. Fifteen educators from across Canada convened in Ottawa on World Teachers’ Day—newly conferred laureates of the Prime Minister’s Awards for Teaching Excellence. The country’s highest honour for the teaching profession was accompanied by a $5000 financial award and, this year, compliments of the Prime Minister and his wife Laureen, a private reception at 24 Sussex Drive. 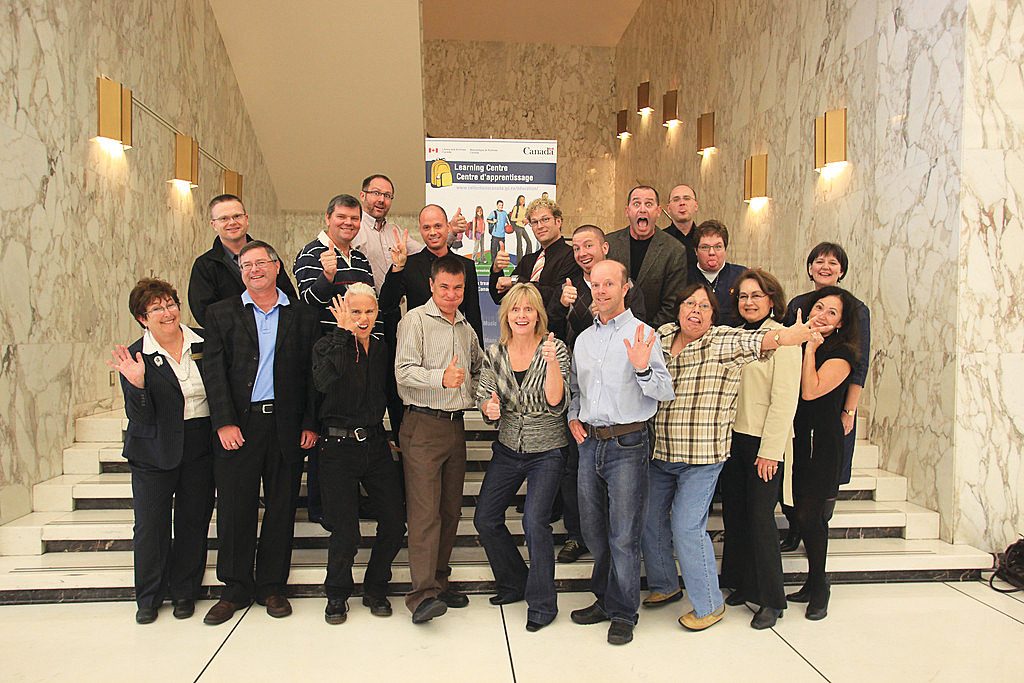 From Muriel Sawyer, a dynamic and passionate gatekeeper of the Ojibwe language and pioneer in native language education, to Marc Pelech, a tireless educator who, from a rundown portable, founded an award-winning student art collective, the 2009 laureates are outstanding educators to say the very least.

Signalled by their gold lapel pins, the Prime Minister’s Awards laureates shuffled around Ottawa for five days spending time on Parliament Hill, having cocktails at 24 Sussex, lunch at the Library of Canada and even an impromptu meeting with Justin Trudeau! The week was packed with activities and social events but was not without some serious discussion. Two jampacked days of policy discussion unfolded at the Minto Suites, the delegation’s home base, from which the PMA will compile their famed “Exemplary Practices” document. This annual publication is meant to disseminate the “brain pickings” of these visionary teachers to colleagues from coast to coast to coast.

“Let’s not create a class of celebrity teachers,” comments Marc Pelech who worries about those teachers who are not necessarily networking experts or entrepreneurial in their day-to-day classroom work going unnoticed by such awards as this. Although awards may lead some teachers to claim exceptional notoriety within their profession, Canada does seem to be lagging in teacher recognition, especially in comparison to our friends south of the boarder who even operate a National Teachers Hall of Fame Museum. For example, in Canada, the Governor General also recognizes teachers for their good work, but alas, only for the teaching of history! Casey Brown, a principal- teacher from Alberta and another 2009 laureate, states that “teachers— great teachers—do not seek awards” but does agree that a national archive or museum would be a good investment “because it would show people what teachers do and why teaching is such a rewarding profession.”

Although undoubtedly a great honour for all recipients, the award came at an especially opportune time for Alberta laureate Daniel Buchanan who was trying to decide when to propose to his girlfriend while, at the same time, unpacking his newly purchased home. Although aware of the nomination, Daniel comments on his surprise of actually receiving the award: “with so many amazing teachers in Canada, I had written off the award and treated the nomination as a compliment and commendation on its own, which it truly was.” Certainly 2009 will be one to remember for this trailblazer in classroom technology.

With a surprising number of men on the roster, all the 2009 laureates are exceptional and unique in their teaching practices. Public educators affect our society in an awesome way; the responsibility of being in the classroom day-to-day is one that far too many people simply cannot fully understand or appreciate. There is no neutral ground in teaching—every time a teacher enters a classroom and stands in front of a group of students they are either transforming society or reproducing it. Even the silence is an endorsement of the status quo. Teaching is the future of this country as Stephen Harper reminded us at the national awards ceremony on Parliament Hill, and this exceptional responsibility needs to be recognized.

A great thank you is due to Industry Canada and the staff of the Prime Minister’s Awards for Teaching Excellence. Although a mere fifteen educators have been conferred this prestigious title in 2009, as Canadians we have all benefited by investing in recognizing and appreciating one of the most difficult but crucial professions. Those of us who teach recognize the great importance of this rewarding career, but this award, as Casey Brown reminds us, “demonstrates that others think what we are doing is important too.”

Michael Ernest Sweet
Michael Ernest Sweet is the founder of the Learning for a Cause Group, an appointed member of the Canadian Commission for UNESCO, and a regular contributor to Canadian Teacher Magazine. He is also a 2009 laureate of the Prime Minister’s Award for Teaching Excellence.

For more information about the Prime Minister’s Awards for Teaching Excellence visit www.pma-ppm.gc.ca.

Those Who Can’t Do, Teach

Into the Deep: Aquatic Biomes