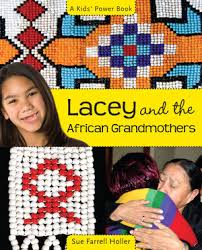 This is a work of fiction, but based on a true story of a young girl who is a member of the Blackfoot Siksika Nation in Alberta. When she learned of the Stephen Lewis Foundation’s Grandmothers to Grandmothers campaign, which connects grandmothers in Canada with grandmothers in Africa who are raising children orphaned by AIDS, she was determined to help. With the support of her family and community, she learned to use a sewing machine and began sewing purses using donated materials. The highlight of her efforts to raise money was a visit by two African grandmothers who were in Canada to promote the campaign. This is a story of remarkable courage and initiative in a young person who wanted to help others less fortunate. Photos of the visit by the African grandmothers are included.

This review is from Canadian Teacher Magazine’s November 2009 issue.