Like other communities across Canada, ours has seen an increase in Food Bank usage in recent years. And in our west coast, Vancouver Island community, food security is starting to be a concern. People here are coming to realize that only a very small percentage of what we eat is produced close to home. 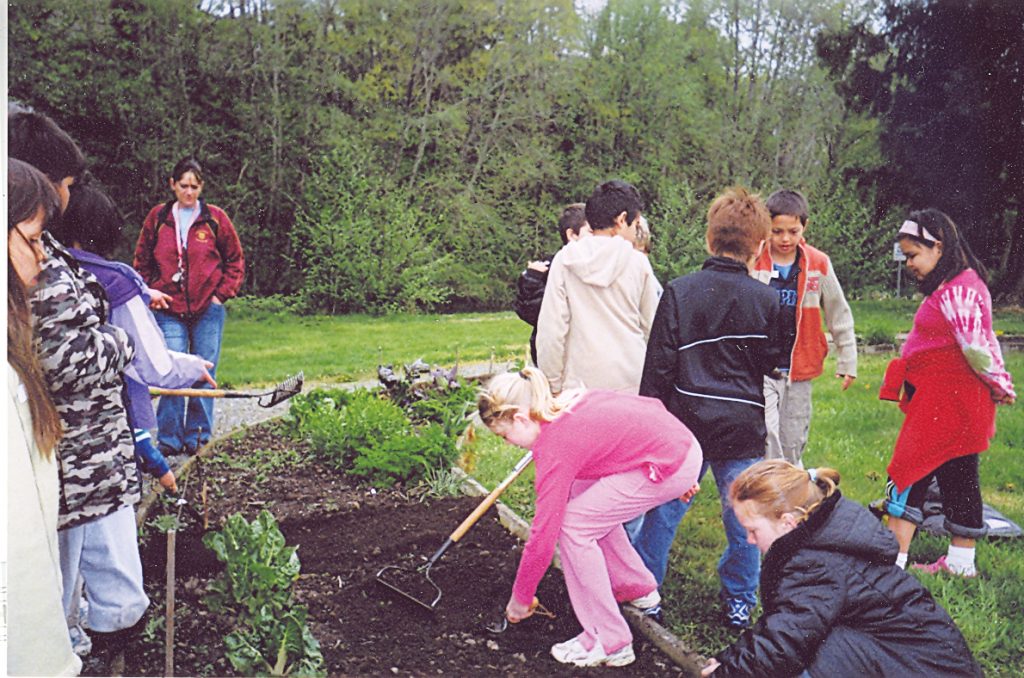 Longtime gardener Carol Sim felt that there was a disconnection for young children in knowing where their food comes from. She also knew of seniors who were becoming increasingly isolated in their apartments. She wanted to create a program or activity that would involve seniors and school children. Then she thought about putting the two ideas together—seniors and children as “GardenPals” who would collaborate on a community garden project. Carol decided to develop the idea as a homework assignment for the Horticultural Therapy course she was taking at Providence Farm (www.providence.bc.ca). 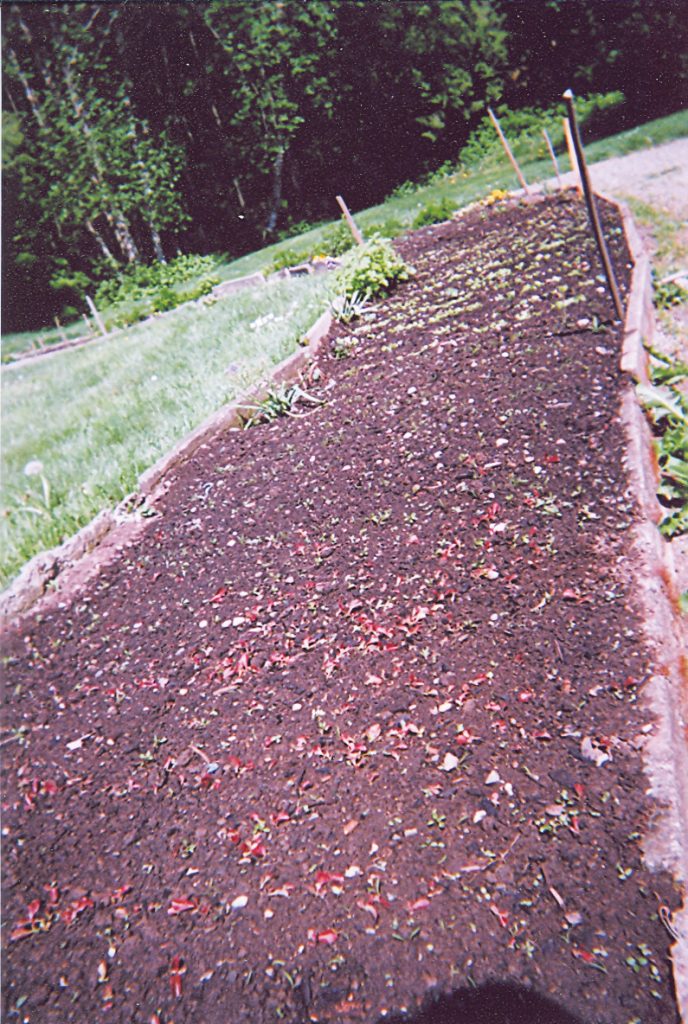 Her first step was to visit the school closest to the already established Jubilee Community Gardens and meet with the principal to see if he and the staff were receptive to the idea. The principal told her that the school originally had a garden on site where the children learned science and math skills and that he was interested in re-establishing that program. It was serendipitous that she and the principal were thinking in the same way. They agreed that the school was close enough that each participating class could walk to and from the Jubilee Community Gardens.

The JCG is in an urban neighbourhood park surrounded by seniors’ complexes, condominiums, apartments and smaller, older houses. The motto of the JDC Society is “Growing Gardens and Neighbourhood Connections.” In 2004 there were about twenty members who rented plots at the Gardens. This number grew to thirty in 2005 and is now at forty, which is as many plots as can realistically fit into the space allowed in the park for gardens. That meant that there were people using the park who might be interested in being involved in a GardenPals project.

Carol went to the JCG Society meeting to tell them of her idea. She asked for their support and problem solved with them. They were supportive of her idea and saw it as an opportunity to do some outreach to the larger community. They were willing to give her an honorarium and to provide insurance. A few gardeners who had plots offered to help with program.

In the spring of 2005, she began with a pilot project. The classes came down to just tour the gardens. In 2006, Carol did four training sessions or “training teas,” as she called them, for volunteers. Each session involved an orientation and socializing over organic fruit and herbal tea, as well as a walk around the garden. During the sessions, there was discussion about how to work with school-age children.

One day a volunteer arrived at the tables that Carol had set up for the tea. The volunteer was a newly retired teacher on her way to the gym. As she neared the garden plots she was thinking that if she had taught at the neighbourhood school she would have done something to involve her class of children in this nearby garden project. When she passed the JCG shed she saw the table and the poster asking for volunteers to work with the children as GardenPals. She signed up and soon became Carol’s partner, bringing her invaluable expertise in working with school children to the project.

Carol looked to the larger community for funding and in-kind donations. She called herself “Your Favourite Garden Pest” when she approached people in the following years of the project.

Carol’s goals for the program in 2006 were to teach the children where food came from, to connect them to their local park and to meet some of the neighbours. She set up three stations. When each class arrived at the JCG for their scheduled one-hour session, Carol would lead one group, and volunteers would take the other two. A volunteer acting as timekeeper would tell the groups when it was time to rotate to the next station. In the June evaluation process, the students indicated that they really liked working with the tools so in the following years they did more hands-on work. 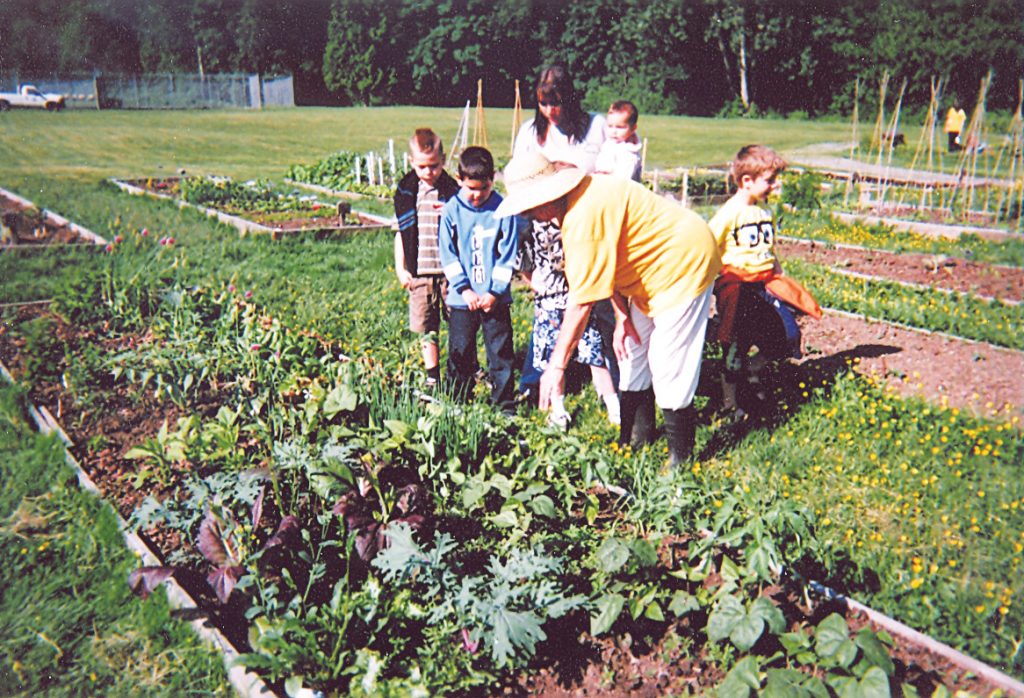 The program evolved, and in the spring of 2007 Carol included a station for planting seeds. She found donors for seeds, and chose quick-growing salad veggies. The children, with the help of a volunteer, seeded lettuce, radish and carrots in April. Since all the seeds had been chosen to mature in sixty days, in June the vegetables were ready for picking. The children took these vegetables back to their school to make salads. Many of the younger children didn’t know what goes into salads and found that they liked them a lot!

The children did their planting in one of two communal garden beds in a location separate from the ones rented by the JCG members. Each class was divided into three or four groups that worked at three or four stations depending on how many volunteers there were that day and the size of the class. Every child got to work at every station as they rotated every twenty minutes. Carol’s Outdoor Classroom was a constant while other stations were determined by the work that needed to be done that day. It was just like a real garden! Stations that changed with the season were planting, weeding, composting, tasting party and picking. Most of the children love to use the garden tools, so even weeding isn’t a chore for them. 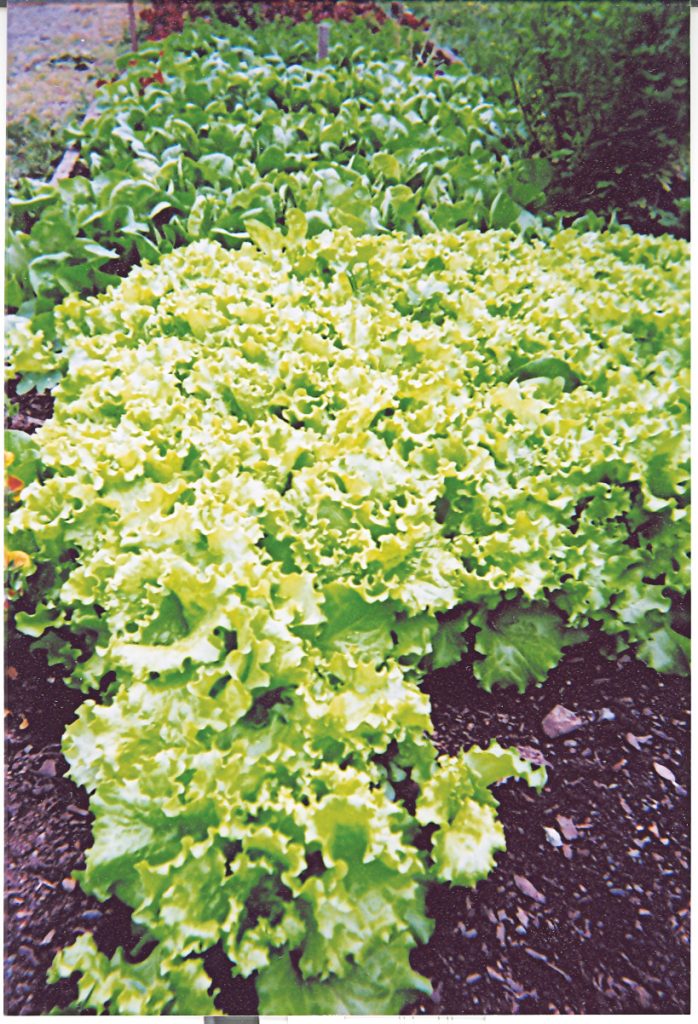 One evening during a JCG Society work party, the gardeners stopped and looked up from their work at the sound of children running excitedly toward the gardens. Their worries were soon dispelled because it turned out that this group of children had brought their parents to see what was coming up in “their” garden. They obviously felt pride and ownership in the planting and growing of the seeds.

Carol made sure that the children knew where the food that they picked was going each time. Usually they picked two bags for school while another four bags were donated to others in the community. Carol pointed out to the children that the adults in the GardenPals program were volunteers and had each class thank them before they left. Many of the teachers from the school have the children thank Carol in their native Hul’qumi’num language as well as in English.

In the spring of 2008, in addition to the training tea, Carol promoted the project at two other seniors’ complexes in the downtown area and got additional volunteers. One man, Gordon, came on a motorized scooter and became a favourite with a little boy in a Grade 3 class. He would always ask where Gordon was if Gordon wasn’t there that day. Gordon was 93 and still trying new things!

The classes came three times in the spring of 2007 and again in the fall. An evaluation was done in the fall with forms going to students, teachers, volunteers and donors. All the results were summarized and the two-page report was given to all the adults involved.

The school is an elementary school with students from Kindergarten to Grade 6. In spring of 2008, thirteen out of the fifteen classes participated, showing that GardenPals is still expanding. This winning combination of patient, caring seniors and enthusiastic children has proven beneficial for the neighbourhood and JCG, as well as participants. The children enjoy eating the fresh, organic food that they have grown themselves and hopefully will become gardeners. In the future, these gardeners will know how to feed themselves.

Carol Sim has a Horticultural Therapy Certificate and a Master Gardener Certificate. She volunteered in nature programs in local schools for ten years before launching the GardenPals project. She has been an organic gardener for over twenty years.

This article is from Canadian Teacher Magazine’s May 2009 issue.

Building Outside the Blocks