Swearing among children is now so prevalent that schools are looking at ways of addressing the problem. Bremerton (Washington) High School, in the USA, had a “Dare Not To Swear!” campaign whereby more than 1000 pupils and staff signed a pledge to give up using swear words. Wednesfield High School, near Wolverhampton in the UK, introduced a “zero tolerance” policy on swearing, and staff found that both discipline and behaviour improved as a result. Here are some ideas to help teachers address the issue of swearing in schools.

What is swearing? (Swearing is using language that debases anything that should be held in reverence or respect—such as someone’s religion—or is said as an act of aggression. It includes racist and sexist remarks and words that are derogatory to any group of people.)

Why do people swear? (To make them feel part of a group; to make them look tough; because their parents or friends swear; because they like the sound of the words or they think it’s funny to swear; to shock other people; to bully other people; because everyone around them swears; because they don’t know enough adjectives to use alternative words; because they have vocal tics as part of Tourette’s syndrome over which they have little or no control—although they can deliberately swear using their diagnosis as an excuse.)

What are unhealthy consequences of swearing? (You might lose friends and the respect of other people; many people can get hurt by it; your parents might feel disappointed about the language you use; you might find it hard to stop swearing when it matters; you don’t look for alternative ways to settle disputes; you retain a limited vocabulary, and you might lose your job at some time in the future for swearing.)

Here are some ideas to help children stop swearing:

Ask for two volunteers to take sides in a debate about whether swearing should be banned at school. Divide the class into two groups and ask each group to think of as many reasons as they can to support their speaker. After the debate, have a vote as to whether the school should ban swearing. However, if the children were to vote in favour of having a swearing ban, you need to consider whether this is a step the school is prepared to take as, initially, it would involve hard work and commitment from all staff members. How would it be implemented? And how could the children win over their peers to accept the new ruling?

Here are some points the speakers could make: 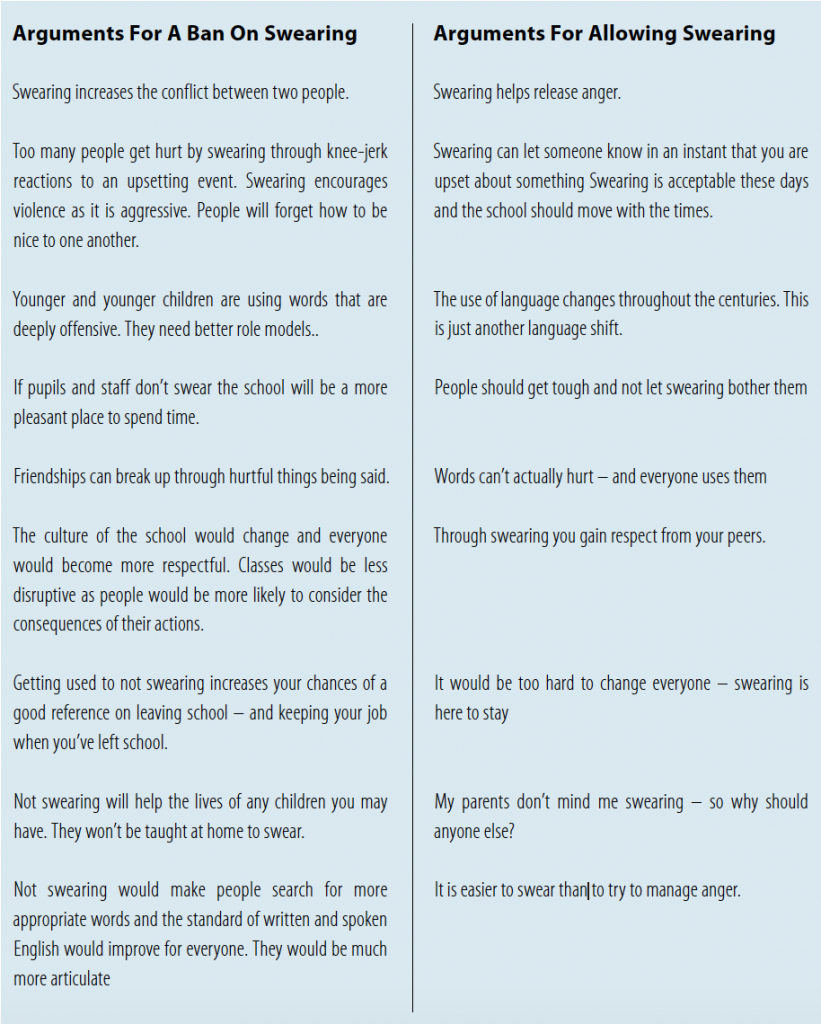 In a society that’s experiencing increasing violence among young people, working towards reducing children’s aggression by making them think harder about the language they use—and, hopefully, modifying it where necessary—can only be a good thing.

This article is from Canadian Teacher Magazine’s May 2009 issue.

How Virtual Computing Helped Save Our Elementary School...

Addison Addley and the Things That Aren’t There

Youth Up Front: Climate Solutions and Actions in...