From my experience, I conclude that near the equator, men are possessed of an urge to break up concrete with big hammers and that this impulse manifests shortly after daybreak and continues until sundown. In the tropics, that’s twelve hours of noise. We’ve seen it in China, Viet Nam, Thailand and now Peru, and the symptoms are the same. When it strikes, the men obey like automatons, not even taking time to put on shirts or hard hats or boots, just swinging away in sunshine and rain. Sometimes, they will stretch out on the concrete and drop into unconsciousness as if in some bonding ritual with the slabs they have been pounding. No casual siesta this, just a surrender to exhaustion. In Peru, there are pickup trucks, but still few hard hats or boots. No one sings quaint folk songs as they work. 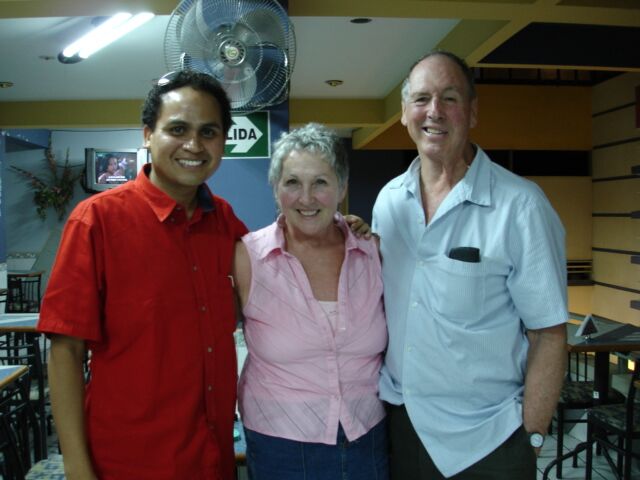 There is an election going on right now, and that brings another kind of collective noise to the social forefront. Here in Chiclayo, it means that every afternoon big trucks will block off part of the main street and party workers will unload staging, sound systems and chairs for a night rally. By early evening they’re all at it: the warm-up act belting out music from the stage; the sound trucks driving around with loudspeakers at maximum, exhorting or cajoling or giving the opposition hell. We saw one small pickup truck with three huge speakers and the driver zealously using his prized microphone. You don’t need the language to know when political proselytizing is going on. For all I know, it could be the same voice from the same ad firm doing all the messages for all the parties—all twenty-four of them. That’s right, twenty-four.

One doctor’s diagnosis of his nation’s penchant for forming new parties was simple: “We’re crazy,” he said, and went on to describe some of the results of that craziness. There would be endless debates when no one party could ever hope to marshal a majority to enact any legislation. I found out that every voter casts a ballot directly for the president and for a representative in congress, and voted by marking with an inked fingertip, the party symbol on a very large ballot.

I learned that the extremes of wealth and poverty meant that large blocks of votes could be gained (bought and paid for, I think was the expression) by anyone willing to promise the moon and give a bit of happy time up front. I thought that Canadian politicians had originated the rural whisky ride to the polls, but I wasn’t talking. Anywhere, it would be a nutty system.

Of course, Peruvians had other models to consider in the regimes of Chile and Argentina where governments had conspired to murder a lot of their own citizens. They had had their own civil wars and presidents who’d stolen money and left the country. Hell, why not twenty-four parties! Let ‘em all watch the one at the top.

Most of the people on the streets just want to be left alone, not taxed too much, not pay too much for medical care and their kids’ education, and really just left to hustle a few bucks and dream. It doesn’t look like it’s going to happen, but during an election, everyone can get their hopes inflated a little.

One of the simplest of the tasks that we’ve had to do here was delivering items from a huge suitcase of blankets and medical supplies given by Canadians Sharing Hope to some clinics. There was a lot of money to be given over as well but that went to Dr. Guevara and he said how he’d spend it and that was easy. There are people like him who do incredible work in the world with people who can’t pay anything but who desperately need help. You can be with these people for a few minutes, not talking philosophy or any grand dreams, but just chatting about what’s needed where, and you’d give them anything they asked for … except they don’t ask. They thank you for whatever you have given and get on with whatever needs doing next. We were the couriers who delivered the supplies, and it was a deeply moving experience, as if someone had asked if we were going anywhere near the Olympic Stadium would we mind dropping off this torch from the folks back home.

We went to the Santa Angela Clinic on the edge of town, about six blocks away from paved streets and normal city life, but a world away from the possibilities thereof. The pavement stopped and deep ruts began. In the wet season, it must be a swamp. We passed people carrying tubs on their heads, returning from local standpipes to dark adobe block homes, small children toddling beside. In doorways, young women were nursing babies, others at their knees—children having children. The city dump was nearby, judging by the smell.

We were thanked by the women who ran the clinic. They described their work. One program was addressing violence in families. Did we know about that? Frustration often led to violence against family members and it was important to have people talk about their situations and promise before their community that they would not give in to violence. Hell, yes, we knew about that, but I couldn’t imagine that the forces of despair operating in this place would be anything I had ever experienced.

Someone told me once that the only way to get a big job done was to realize that there was no such thing as personal mastery, that it would take a force bigger than yourself to do a job bigger than what you could handle and to find a group that served people and surrender to serving it. This continues to be a wonderful, humbling opportunity. It wakes us up as sharply as the sound of sledgehammers on concrete.