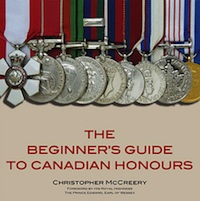 This introductory guide to official Canadian honours— those presented by the governor general on behalf of the Queen—begins with the question, “What is an honour?” explaining why a nation officially recognizes people who have served others in an extraordinary way. The history of honours in Canada is outlined, beginning with how pre-contact First Nations honoured people who made significant contributions to their communities. After Confederation, the new dominion of Canada used the British honours system, but the creation of The Order of Canada in 1967 marked the beginning of distinct Canadian honours. Both military and civilian honours are discussed, with photographs depicting important medals and some of the well-known people who have been recognized with awards. Although not exhaustive in its scope since there are so many honours conferred in Canada, this guide explains how and when many of Canada’s major honours are bestowed, providing insight into one of the more formal aspects of Canadian society.

This review is from Canadian Teacher Magazine’s March 2009 issue.

The Little Black Book for Guys: Guys Talk About Sex