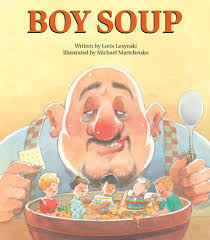 First published in 1996, this delightfully silly but suspenseful tale has been re-released with new illustrations by Michael Marchenko (well known for his work with Robert Munsch titles). The story has young Kate outsmarting a giant who scoops up a bunch of boys—getting Kate in the bunch—to make Boy Soup to cure his horrible cold. His Giants Home Medical Guide prescribes the soup, and despite feeling a tad guilty, he decides that the remedy would be justified since he is feeling so awful. Kate’s quick thinking convinces him that the soup should be made by boys not with boys as ingredients, and the day is saved. The lovely ending has the giant admitting his mistake in thinking that it was OK to eat boys, and thanking Kate for tricking him. Lesynki’s clever rhyming text and Martchenko’s masterful illustrations combine to make this a wonderful new picture book, which will find appreciative fans among both teachers and young readers.

This review is from Canadian Teacher Magazine’s March 2009 issue.

Courage and Compassion: Ten Canadians Who Made A Differenc

Everyone Wins! Cooperative Games & Activities for All...